PORT MOODY — If they wanted to, the senior girls basketball team from Port Moody’s Heritage Woods Secondary could probably start a pretty mean bonfire by just collecting all the crutches, braces and bandages they’ve used to help them limp through the first seven weeks of the high school season.

Yet the same team, which counts two ACL injuries, a broken foot, a concussion, two serious ankle injuries and torn thumb ligaments among its laundry list of ailments has simply refused to co-author a ‘woe-is-me’ narrative.

Instead, the resiliency which helped lead the Kodiaks past a pair of fellow B.C. Top 10 AAA teams to first place at its own invitational tournament this past week will be on display over the next four days as Heritage Woods opens play Wednesday (4:15 p.m.) against the host team as part of a star-studded 12-team field at the Centennial Top 10 Shoot-Out in Coquitlam. Included in the field are the top five Top 10 teams in the most recent B.C. AAA poll. (Full four-day tournament schedule below)

“You can see the burning passion they have for their sport, but you can also see the absolute frustration they’ve felt,” said Heritage Woods head coach Ross Tomlinson of his players, the majority of whom finally got enough time together last week to beat Top 10-ranked Abbotsford powers Robert Bateman (67-48) and Yale (73-63) in the respective semi-final and championship final games at the Kodiak Classic tournament.

“It has been the most frustrating season I’ve had, because they have all been the kinds of things you can’t anticipate happening,” says Tomlinson, a coaching lifer who in listing the travails of his team is quick to reference the likes of the Whistler Storm, which have also seen its roster decimated by serious injuries.

“For us, it’s a reminder of how much we have to value the process and the journey along the way,” continued Tomlinson, whose team moved up from No. 10 to No. 7 in the provincial rankings issued Wednesday. “I know wins and losses are important to our players, but I think the thing they like most is the camaraderie. At the end of the day, they value relationships.”

The constant through all of the adversity has been 6-foot-2 senior forward Emily Instant, a UBC Okanagan recruit.

“Throughout it all, Emily has been very consistent with her scoring and her rebounding,” says Tomlinson of Instant, whose health has been matched by that of 5-foot-10 senior forward and Kodiak Classic MVP Breona Martin.

Outside of that pair, however, the injury bug has not played favourites with the rest of the team’s main rotation of players.

The Kodiaks, led by current UBC freshman starter Hailey Counsell, still managed to become the first team in the program’s history top qualify for the B.C. tournament and played very well en route to suffering a first-round loss to at the provincials to eventual champion Kelowna.

Griffin, now nine months removed from surgery, has spent the early part of her season on a defined minutes count and is just now becoming fully integrated. At her best she is a fluid force as both a scorer and facilitator.

She’s been joined by fellow Grade 11 guard Maddy Counsell, who has beat back a pair of torn ligament injuries, first to her ankle, and then to her thumb; and by senior guard Rachael Tomlinson who was out for nine weeks with a fractured foot.

The Kodiaks lost 5-foot-11 forward and likely sixth-player Paige Gant to an ACL injury in the first practice of the season, and currently are awaiting results to determiner whether key reserve Kerry Khuc, a Grade 11 forward, has also suffered an ACL tear.

Grade 10 guard Lauren Tomlinson suffered a concussion early in the season, and senior guard Heidi Mueckel an ankle sprain that kept her out of action for about three weeks.

Add all of that up, then consider the fact that only three weeks remain before the start of Fraser Valley playoffs, and there is a lot of chemistry to be found in a short amount of time.

That’s why their victory over Yale in last Saturday’s tourney final was just what the doctor ordered for Heritage Woods.

“The players felt that we were on the right track even though we’re not completely healthy yet, but the challenge, of course, is that it’s a very condensed season,” says Tomlinson of the 72 days between the start of the season and the start of the Fraser Valley playoffs.

For the record, 51 days have passed and there are 21 more left before the start of the second season.

“It’s been about people adjusting to different roles and learning to play outside of their comfort zone,” Tomlinson added.

“Given the season thus far, the only thing I hope for is a healthy team,” he continues. “Every one of our players has different strengths and weaknesses and we have done our best to enhance the strengths and minimize the weaknesses. We just want to be able to put the best team on the court that we can.”

The format for this season’s Top 10 Shoot-Out is different from previous years due to construction at the school and the availability of just one gymnasium versus the normal two gyms.

Thus, the size of the field has been cut from 12 to 16 teams, with one extra day of play added.

The 12 teams have been grouped into four pools and each team will play the other two teams in their respective pool once over the first two days of competition.

From there, the four pool winners meet in Friday semifinals ahead of Saturday’s 5:45 p.m. championship game.

Four games will be played Wednesday, eight games Thursday, and six games both Friday and Saturday. 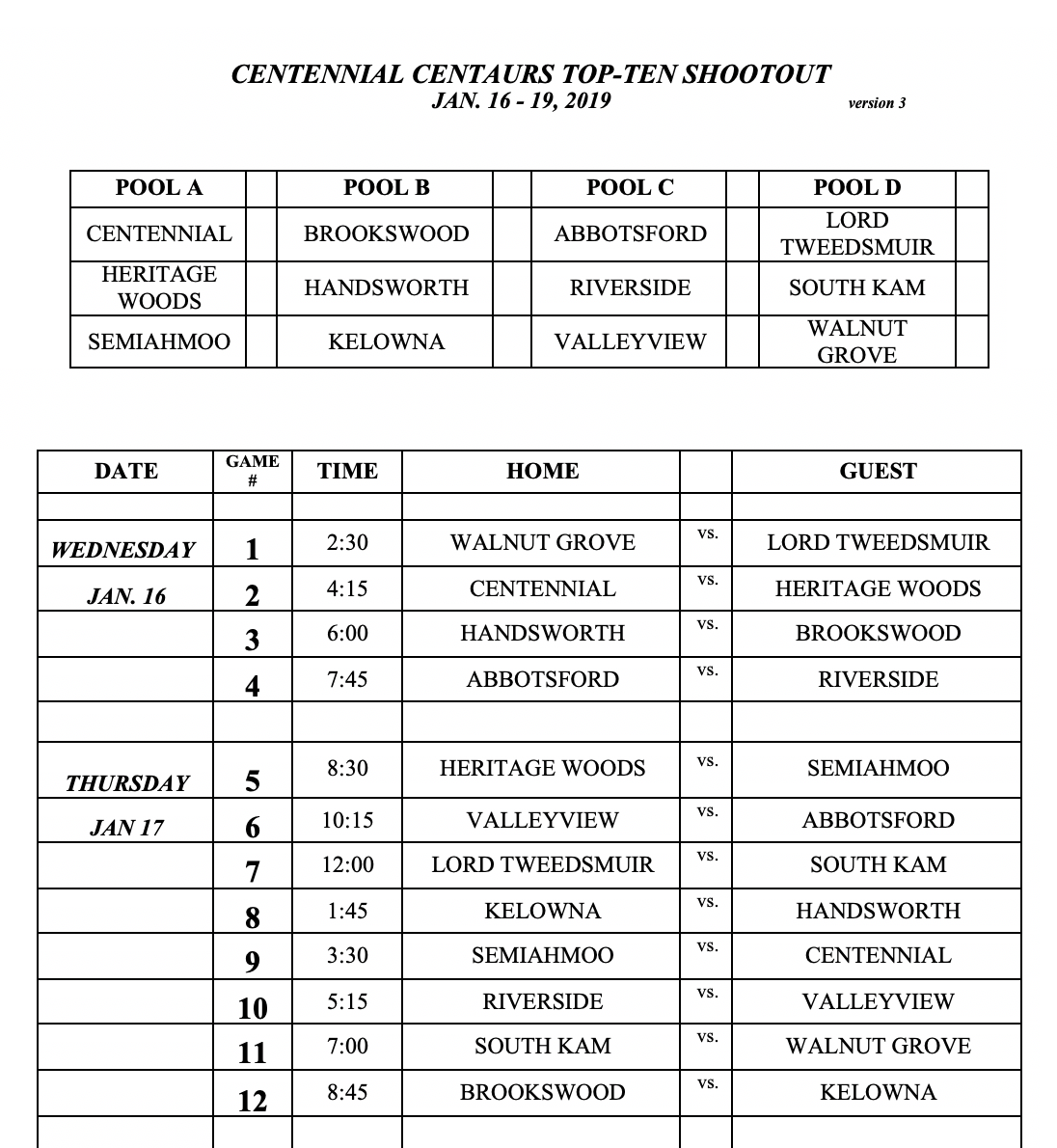 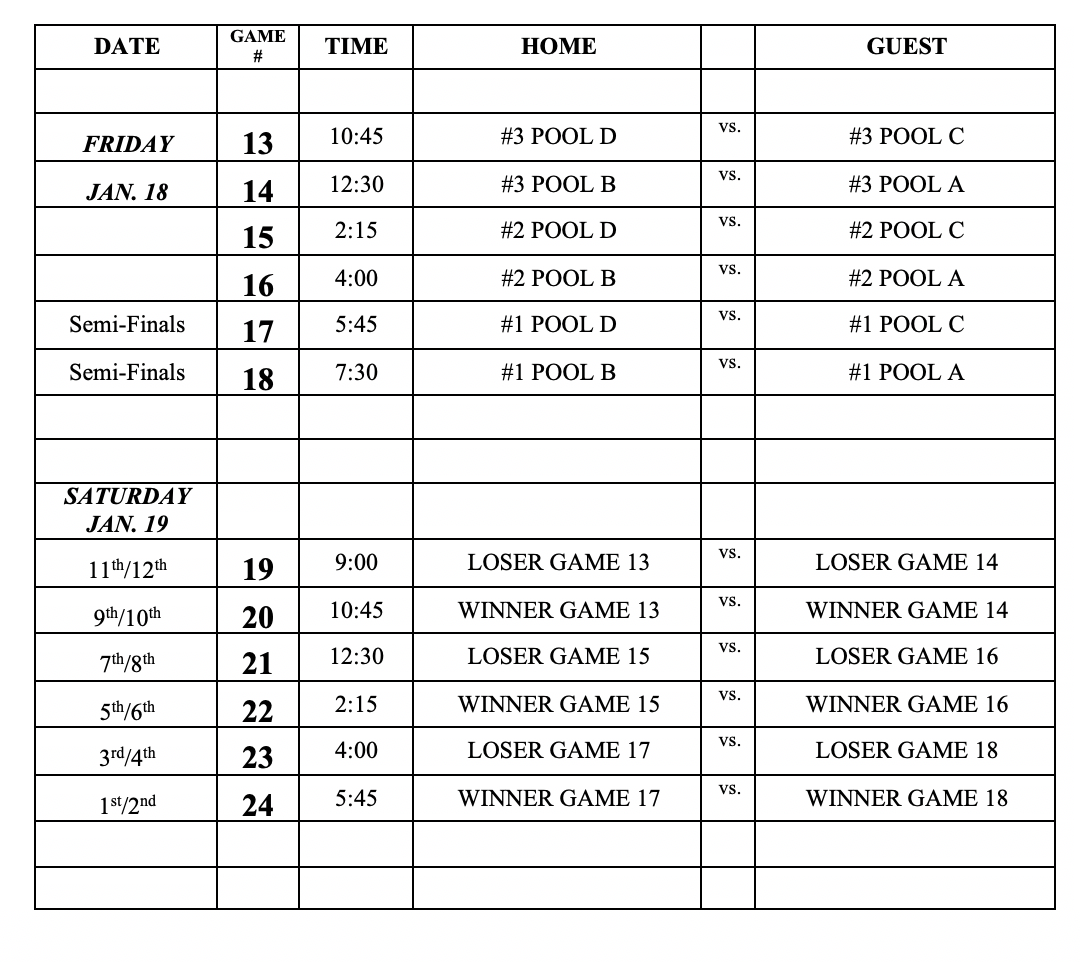