ABBOTSFORD — It was hard not to look at the final score and not have your jaw figuratively drop.

Yet in the aftermath of a 135-128 triple-overtime win over Chilliwack’s Triple A No. 2-ranked G.W. Graham Grizzlies in the quarterfinal round Friday night at Robert Bateman’s Timberwolves Classic senior boys basketball tournament, Byrne Creek Bulldogs’ head coach Bal Dhillon was stressing something even more important in the immediate future for the honourable mention team from Burnaby.

“We talked about learning how to win,” said Dhillon, whose team tipped off against the Grizz at 5:15 p.m., but didn’t gather as a team for a post-game talk until just after 8 p.m. in a game that likely sits somewhere in the upper percentile of the highest scoring games in provincial boys history.

Dhillon thought it was perhaps the highest scoring overall game his program has been involved in, but did mention that they scored 129 points during one game in the 2014-15 season.

On Friday, the player stepping up to lead the Bulldogs was none other than 10th grade guard Bobby Mabeny, who scored a game-high 47 points in the victory.

With his team down three near the end of the first overtime, Mabeny hit a huge three to force the second OT period, one of eight triples he drained on the night.

“He’s a skilled and talented kid and really cutting his teeth as a leader and today he put his team on his back,” said Dhillon.

Then, in the third overtime, Sammy Kitumaini dropped a big triple which ultimately gave the Bulldogs the cushion they needed to cap a stretch-drive rally.

“That shot was a dagger,” said Dhillon.

Mukhtar Afadish and Adam Muhammad each added 29 points for the winners.

Cairo Almarez added 36 points for the Grizzlies, including nine treys. Zachary Klim had 25, Jude Hall 21, and Clay Kurtz and Matthias Klim 18 each. 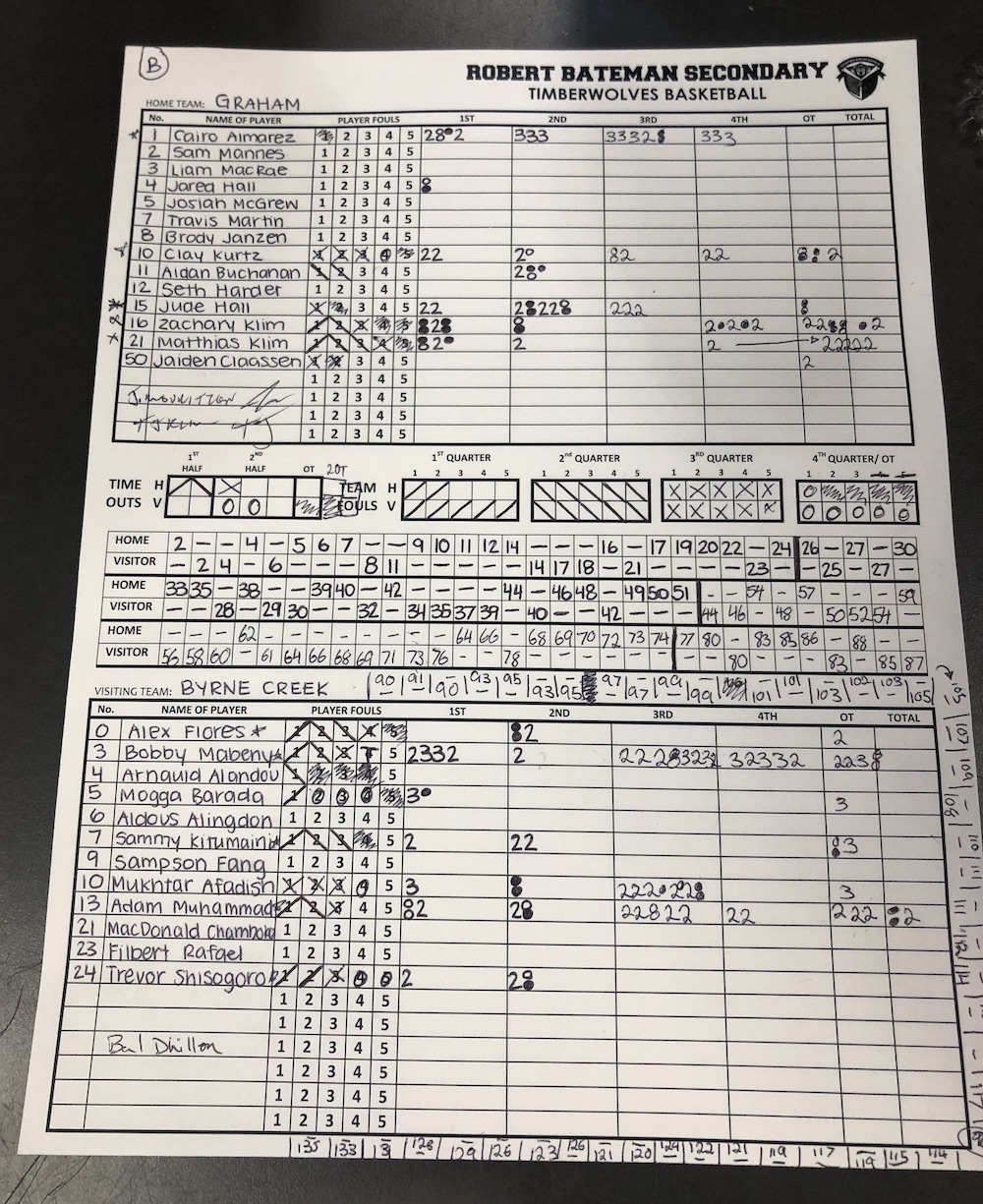 Dhillon applauded the defensive willingness of players like Muhammad, Mogga Barada, Alex Flores and Arnauld Alandou, all of whom gave up at least a half-foot in size to the Grizzlies’ talented Klim brothers, each checking in at about 6-foot-9.

The Bulldogs will face No. 5 Pitt Meadows in an 11 a.m. semifinal Saturday after the Marauders rallied to topple Maple Ridge’s honourable mention Thomas Haney Thunder 75-72 in overtime.

In an earlier quarterfinal, No. 3 Vernon topped MEI 86-60 and will face No. 8 Tupper, a 72-60 winner over host Bateman in the day’s final quarterfinal game.

That second semifinal will be played at 12:45 p.m. Saturday, with the championship final slated for 8:30 p.m.