Here are my three big basketball take-away from the recently-completed university sports weekend:

VANCOUVER — The UBC Thunderbirds are not getting the likes of the Carelton Ravens, the Ottawa Gee-Gees or the Calgary Dinos over the last few weeks of their Canada West regular season schedule.

Yet their can be no mistaking how proficient the U Sports’ No. 2-ranked men’s team become at both ends of the court, despite the fact they have faced some of the conference’s lesser lights the past few weekends.

On Friday and Saturday, UBC played its final two home games of the conference regular season and swept the UNBC Timberwolves by scores of 123-75 on Friday and 109-61 on Saturday.

That marks the third time in four games that UBC has broken the century mark on offence, and the fourth time in seven games they have managed the feat.

“It seems like something just clicked around Christmas time,” UBC head coach Kevin Hanson said Sunday morning. “That loss we had to Saskatchewan really got us focused on the defensive end and our energy has really increased since then.”

For Hanson, and for anyone offering their best pre-season prognostications, the one area of the ‘Birds roster that has out-stripped expectation, has been the play of the bench.

“Holy cow, it’s the biggest story,” said Hanson. “(Guard) Taylor Browne is fourth in the conference from three (46.5 per cent). Isaiah (Familia) is shooting it so well and (forward) Luka (Zaharijevic) can’t be stopped in the post right now.”

National scoring leader Conor Morgan and fifth-year stalwart Jordan Jensen-Whyte, of course, lead the team, which wraps up the regular season this coming weekend at the Langley Events Centre against the Trinity Western Spartans (3-15).

Oh, and just as another point of comparison, UBC’s 2005-06 team which went 20-0, finished at a plus-324 in points scored very points allowed. Expansion has not exactly made the week-to-week competition better, but this season’s UBC team nonetheless sits at a plus-410.

HOW TOUGH IS THE GNAC? 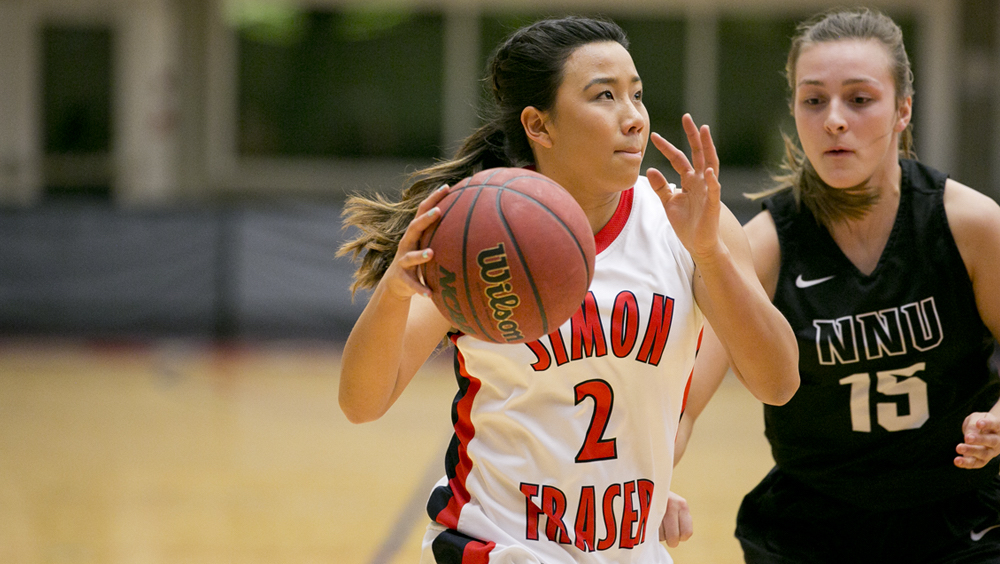 BURNABY — Just so you know how incredibly tough a league the Great Northwest Athletic Conference is, consider the plight of the Simon Fraser Clan women’s team and its Saturday performance against the visiting Central Washington Wildcats.

Yet the margin for error in the GNAC is so small that putting out anything shy of your best performance is grounds for a potential upset.

On Saturday, the Clan’s Elisa Homer buried a trey on the game’s first offensive possession, but Central Washington never relented, throwing No. 24-ranked SFU off its game the entire night to come away with a 73-66 win in overtime.

The win was CWU’s first over a nationally-ranked opponent in 10 years, snapping a string of 33 previous losses.

But more than that, it showed how close the level in talent is throughout the league. Coaches and players have harped on the theme of ‘no easy games in the GNAC’ and Saturday was the proof.

“Our defense was excellent and I thought Jasmin was tremendous in limiting (Ellen) Kett,” CWU head coach Jeff Harada told Wildcatsports.com of SFU’s star point guard, who played 43 of the 45 minutes and was held to just three points, two nights after she had scored a career-high 30 points.

“We got critical stops, rebounded, shared the ball for the best shot and made free throws,” continued Harada. “Those are all the ingredients needed to win on the road against a good team.”

SFU now plays four straight on the road and if they tick off all of those boxes, they’ll be doing their best to put Saturday’s loss behind them as quickly as possible.

I can remember back to the 2013 B.C. high school all-star game at the Langley Events Centre and the two MVP’s that day, both coming from small, Single A schools.

On the boys side, it was Patrick Simon, the beefy forward from PoCo’s Archbiship Carney.

He was headed for a U.S. prep school, but soon enrolled at SFU before transferring to UBC where he has the best chance of his career to win a national championship.

When I talked to Gordon after the game, our immediate topic of discussion was the fact that she would be returning to Langley full time in a few more months to begin her university career on that very court in the fall.

“This is going to be my home gym, so it was awesome to play in it today,” she said, anticipating a CIS career that was set to begin with the Trinity Western Spartans. “I met (TWU head coach) Cheryl (Jean-Paul) last summer and we really connected. I just feel comfortable in the (Fraser) Valley.”

Well, four seasons later, that much is clear.

Her 26 points and 10 rebounds not only represented a second straight double-double in a sweep against Calgary’s host Mt. Royal Cougars, but also gave the Spartans their sixth win in their last seven games.

And over the weekend sweep, Gordon averaged 26 ppg and 12 rpg.

If you’re reading this story on any other website other than one belonging to a university athletic department, it has been taken without appropriate permission. In these challenging times, true journalism will survive only through your dedicated support and loyalty. Varsityletters.ca and all of its exclusive content has been created to serve B.C.’s high school and university sports community with hard work, integrity and respect. Feel free to drop us a line any time at varsitylettersbc@gmail.com.