NORTH VANCOUVER — Stephanie Bell has not forgotten the feeling, even though it happened eight years ago this December.

As a star 6-foot senior forward with North Vancouver’s Argyle Pipers, Bell remembers hearing her name called at the conclusion of the former HSBC Classic boys and girls high school basketball tournament, discovering soon afterwards that she was the recipient of a tournament scholarship to be used at the post-secondary institution of her choice.

A lot of stuff has happened since, including a five-year playing career with the UBC Thunderbirds and a degree in international relations.

Yet it seems only fitting that a player noted for her amazing footwork and her power pirouettes in the paint, has in a manner of speaking, come full circle.

And that’s because Bell, the director of marketing and communications for The Big Ticket, a newly-launching boys and girls high school basketball tournament set to run Nov. 26-Dec. 1, will get the chance to go from the girl who got, to the girls who gives.

The Big Ticket, through the shared cooperation of both Venuekings.com and The Onni Group, will present a total of 40 $1,000 scholarships to 20 male and 20 female student-athletes participating in the week-long event.

“Growing up, I had a couple of very hard-working parents who always saved as much as they could, and we had a goal of a post-secondary education,” remembers Bell. “But it was very helpful to have gotten a scholarship to help me get through school. I have always been appreciative of that.”

If you’re looking at the sheer number of teams, then The Big Ticket lives up to its name.

On Nov. 30, the action shifts up the hill to Simon Fraser. On that day, eight semifinals will be played consecutively from 8 a.m. to a final tip at 7:15 p.m.

On the senior boys side, top teams include G.W. Graham, Rick Hansen and R.A. McMath.

The full tournament draw is below. For opening-round locations and tip-off times, check out BIGTICKETVANCOUVER.COM in the run-up to opening day. 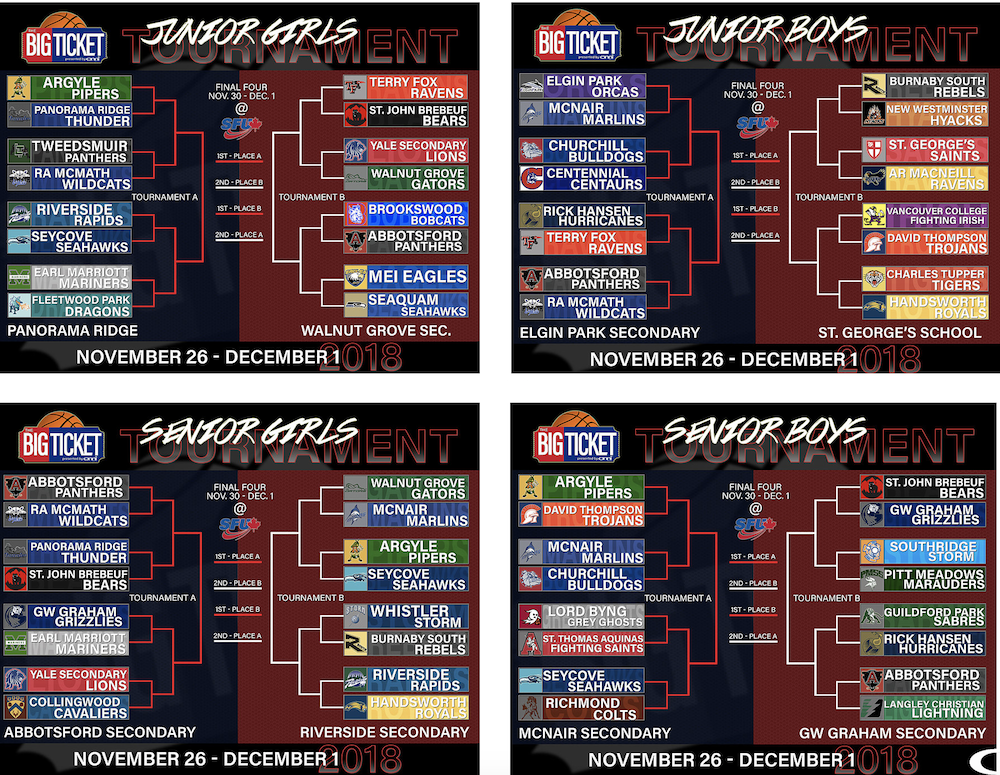