NORTH DELTA — As our Elite Eight round rolled around this week, and the committee entrusted with selecting the winners in our 75th anniversary B.C. high school boys basketball all-time tournament bracket delivered their latest set of verdicts, I knew it was time to pick up the phone and talk with some of the people directly involved with our fantasy re-enactments.

So as we get set to unveil our Final Four field, a tip of the hat goes to the following for taking time to weigh in with their thoughts and remembrances: Nanaimo 1978’s Gerald Kazanowski, Kelowna 2016’s Harry Parmar, Richmond 1988’s Bill Disbrow and Ron Putzi, Abbotsford 1983’s Norm Bradley, Centennial 1972’s Gordon Betcher, and even Hope 1972’s Ken Graham.

Here’s the latest updated draw, with complete game-by-game breakdowns below. Let’s do this again, next week! 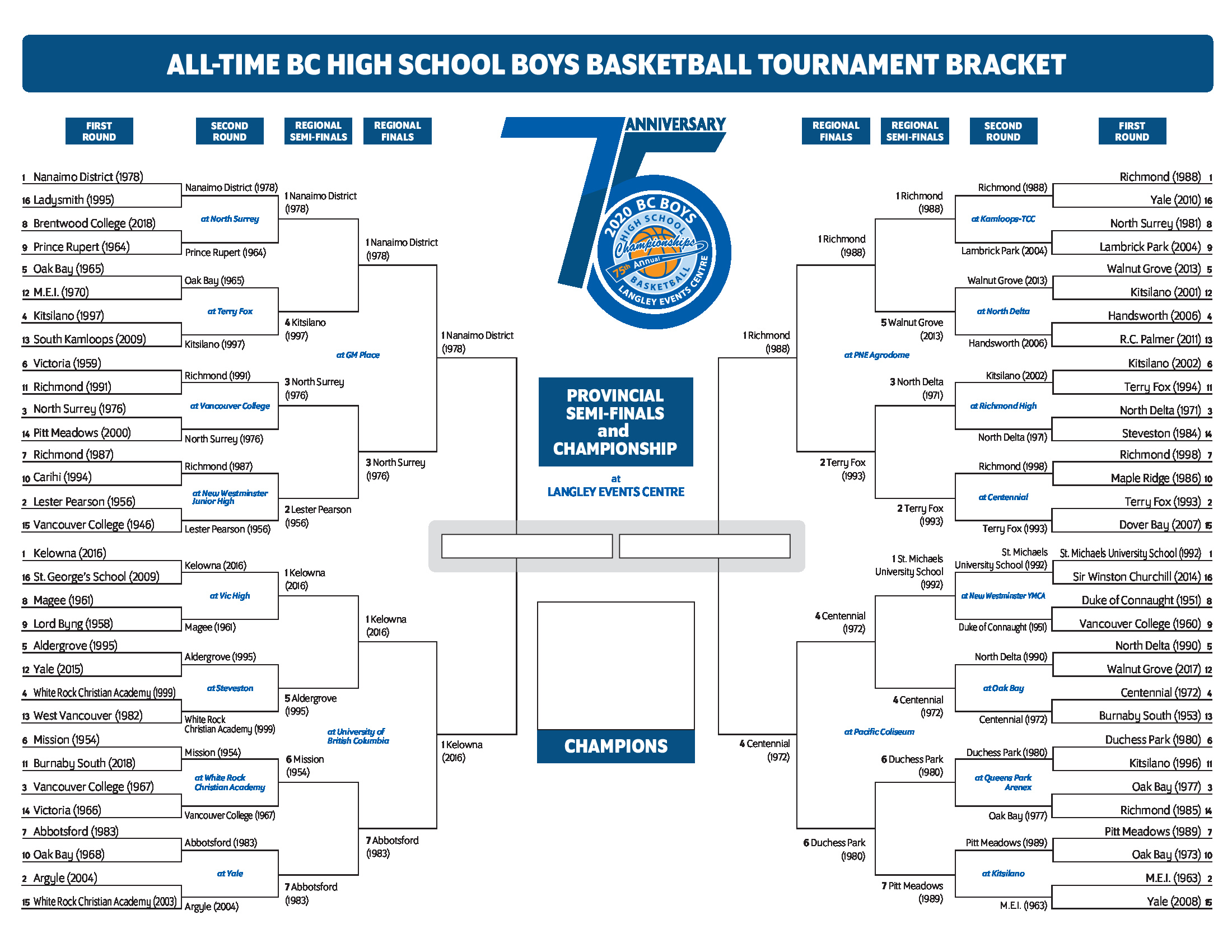 For a higher resolution version of this draw, please click here!

The skinny — The season before the Nanaimo Islanders won the 1978 B.C. title, their provincial tournament run had started with a whimper.

The Islanders were 67-65 losers to the Kelowna Owls in the opening round of play.

Yet the team’s most decorated player remembers a conversation he and his teammates had with their coach at the very start of their fateful 1977-78 season.

“I can still remember that at the start of our Grade 12 season, our coach, John Levering told us ‘Hey guys, we will win the B.C.’s this year,” future Olympian Gerald Kazanowski, 59, told Varsity Letters on Thursday.

“It was a remarkable season… we had such a nice core, and it was a year where there was a lot of talent on Vancouver Island at Oak Bay, and in Duncan.”

In the end, only the Islanders and Bays made it off the Island, and to back up Kazanowski’s point, they met in a classic championship final won 71-62 by the Isles.

“We only lost one game that season, and that was to a touring Australian team, and my memories of playing Oak Bay are so strong,” he added. “We played them five times and we beat them all five times. We played a brand of basketball where we ran and we ran. We were not afraid of anyone. We thought that we would win every game.”

Interestingly enough, their fantasy foes, the 1976 North Surrey Spartans, were a virtual contemporary of theirs, winning all of the spoils just two seasons previous.

Incredibly, Oak Bay’s Ken Kirzinger was a first-team all-star in 1976, 77 and 78, and the Spartans also won their real-world title that season over Oak Bay by a 52-48 score.

Yet in the end, the committee felt that Nanaimo’s chemistry and cohesion was simply too good.

The skinny — It’s a team whose players are still active in the university ranks, yet nothing about their recent vintage has slowed the 2016 Kelowna Owls from standing alone as an historic team.

“It’s a team that did two very big things,” said Owls’ head coach Harry Parmar, who not only guided that 2015-16 team to a perfect record against B.C. competition, but is once again coaching a team expected to contend for all the spoils early next month back at the LEC.

“One, it validated our program, and two, an Okanagan team had never won the provincials before, so when we did it, it put a stamp that basketball was OK in the Okanagan.”

They were more than OK.

They were among the deepest championship teams produced in provincial history.

“We had nine guys that could start on any team in province,” said Parmar. “Our practices were just crazy, and the from all of the work that they put in, that culture is still coming forward. We could adapt and play any style, from big to small to athletic.”

Yet when it came time for 1983 Panthers’ head coach Norm Bradley to weigh in on the proceedings, he did so not only with the knowledge of his own team, but of the opposition as well.

Bradley remembers that as a pivotal time for Shephard, now a UBC Thunderbirds’ star, where he was able to gain much confidence and enjoy a breakout in his game.

And while we have chronicled the excellence of  Abby’s Larry Clarkson, Dave Lescheid, Surinder Sarowa and Chico Duncan since the bracket tipped off at 64 teams, they had more.

“We had a Grade 12 sharpshooter, penetrator and defensive specialist named Bob Fehr, who ran the opposite side of the floor from Sarowa,” said Bradley. “Bob sadly passed away a few years ago, and he would have been Defensive Player of the Tournament if that award existed in 1983. The other player, Suhkvinder ‘Ace’ Brar, was the best sixth man in 1983, a 6-foot-2 left hander, who sliced through defences on the way to the hoop, and who could also shoot the 15-footer when given space and play defence.”

Parmar, of course, has his counters.

“That 2016 team is the gold standard and people around here have said it will never be duplicated.” he said. “You had (bigs) Grant and Owen (Keys at 6-foot-9), you had Nav Sandhu at 6-foot-5 who could play any position on the floor, you had Colin and Davide (Ciancio) who came off the bench and shot the lights out, and there was Mason and Matt Lafontaine (at point guard). We had all the pieces you ever needed.”

In the end, in a battle royal for the ages, it’s the depth and versatility of the Owls which carries them into the Final Four.

The skinny — The legendary, late U.S. high school basketball coaching legend Morgan Wooten said, following the 1987-88 season in which his DeMatha Catholic Stags were ranked the No. 2 team stateside by USA Today, that the Richmond Colts were the best team they had played that entire season.

In front of 4,000 fans at UBC in December of 1987, the Colts trailed DeMatha and its eventual New York Knicks 6-foot-11 forward and first-round draft pick Jerrod Mustaf 75-73 midway through the fourth quarter before finally losing 98-84.

“We’ve played teams from Windsor and other eastern Canadian cities but Richmond’s better than any of them,” said Wooten said that day to The Vancouver Sun’s Harold Munro. “Richmond’s tough, well-coached and quick. They could play against anybody anywhere.”

Added former UBC men’s head coach Bruce Enns that day: “People here should be very, very proud. That old Canadian syndrome that says we can’t be as good as the Americans just isn’t true anymore. I think this is a red-letter day for B.C. basketball.”

“Our practices were incredible,” remembered Disbrow. “Our second team could have made the B.C.’s.”

And when they defeated the Seaquam Seahawks 99-80 in that 1988 final, they completed two straight undefeated seasons against B.C. competition.

“That night when we won, I thought of every player on our team and how much we had practiced throughout our lives, and not just in team practices,” recalled 1988 MVP Putzi on Thursday.

“I though about how much each individual had sacrificed to attain that goal, how those hours were inordinate,” he added. “I just found myself thinking how effort much each us had put in to accomplish that goal.”

Terry Fox’s 1993 team came into the clash with a head of steam, including its second-round fantasy bracket win over the 1998 B.C. champion Richmond Colts, featuring its star, Pasha Bains.

Yet despite the best efforts of its MVP Bret Anderson, and big man Dave Morgan and point guard Vic Grigore, the Ravens’ run out of gas late and have their season come to an end.

The skinny — Two teams, who in the real world, won their B.C. titles at the Pacific Coliseum, gather once again at the Rink on Renfrew for a little hardcourt hockey.

Duchess Park, as tough as they come, however, could find no answer for Lars Hansen, the Centaurs’ 6-foot-10 centre.

In fact, to get as close to the truth as we could as to how dominant the future Sonics’ big man, we lean on the words of one Ken Graham, a member of the 1971-72 Hope Mustangs, that season’s B.C. Single-A champions, and one of history’s great forgotten teams, for this unvarnished scouting recollection.

“We played Centennial a few times that year,” Graham told Varsity Letters. “Our coach, Gordon McKay, always wanted to play against the best teams to prepare us for the provincial tournaments. So we played North Delta, Centennial, Kamloops, North Surrey, Oak Bay, Vancouver College and Abbotsford a few times.

“We won the Snowball tournament and several Fraser Valley tournaments that year,” continued Graham, “but we had no answer for Lars Hansen. I remember one game, I believe we lost 53-48 and Lars got 41 of their points. He would post up in low post and we had no answer for him.  He had a great short jumper as well as a tenacious inside game.”

So just how did teams game plan to stop Hansen?

Graham said the best way, although rarely fully successful, was to turn the game a full-fledged track meet.

“Our best defence against Centennial was our offence,” Graham said. “We were short but we could run. Nobody outran us on the court. That was the only way to eliminate Lars’ defence… outrun him down the court so they had no chance to set up on defence.”

On the night of this fantasy clash, despite the best efforts of Duchess Park Condors like Mike Suderman, Karl Bush and Brian Fenkel, Hansen had his way and the rest of the line up chipped in with what they did best.

“Terry Utuk played point guard and broke presses and got the ball up to the two forwards (Art Abrams and Greg Hoskins),” said Centennial head coach Gordon Betcher. “The players knew their roles. Lars was very coachable.  In spite of all of the attention he received, he was a team player. ”

NEXT: THE FINAL FOUR

(at the Langley Events Centre)