Pose that question to Simon Fraser Clan head men’s basketball coach Steve Hanson as it pertains to where his team fits this season in the Great Northwest Athletic Conference, and he acknowledges that the big picture he sees developing is not the same one on view to the loop’s 10 other schools.

“We’re the 11th-place team that is bringing its starting five back, but I know that’s not necessarily intimidating,” Hanson said in advance of his team’s 87-75 win Friday night in Bellingham over Hawaii Hilo (full box score below).

“But I could tell from how hard we were to play against (late last season) that we had to see the best from other teams for them to get by us.”

Moving forward from a season in which SFU went 2-18 in the conference, that is about as real a comment that can be delivered as to the current state of the program.

Yes, there are no blinders being handed out here, and yes, there will be some tough nights ahead in a conference in which the Clan are still playing catch-up with the rest of the pack.

But there is also a sense that emerging young talent from the last few recruiting classes is finding some cyclical momentum for the first time in a while, and with the label ‘returning’ stamped on the head coach for the first time since 2014, there is hope that traction is finally being made.

A BASKET HALF FULL

Small sample sizes can be deceiving, but in the case of the Clan, it’s not exactly like trying to read tea leaves when you’re examining their final six games of the 2016-17 campaign.

Starting with a Feb. 9 home game against Concordia in which the Clan, over the final seven seconds, committed a pair of turnovers which led to a game-ending four-point play in a 74-73 loss, and culminating just over two weeks later with a season-ending 93-82 win over Seattle Pacific, the Clan went a respectable 2-6 and should have been a .500 team over that stretch.

Again, it’s the same question of perception vs. reality.

The rest of the GNAC certainly wasn’t plagued by restless nights over the late spurt from its last-place lodge brothers up in Canada.

Yet for the Clan, it was an inspirational elixir heading into the off-season.

“I think it meant a lot to our guys,” said Hanson. “For us, we knew early on that we had more to give, but that we weren’t hitting on all cylinders.

“We as coaches are always selling the players on the process,” he continued, “and we pointed out where effort was lacking. It took a while for us to get over ourselves, but once we did, we got better. But there is no doubt that we realize that we needed to get more talented, bigger and stronger in a lot of areas.”

The greatest strength of the 2017-18 Clan are the guard-based skills owned by both its guard and forward types.

Let’s look at some of the key Clan players and reference their numbers from Friday’s win over Hawaii-Hilo at Western Washington.

He remains the team’s most unique talent because of his ability to bridge the back and front courts of the team.

“In junior college, he got lots of shots and he had stuff drawn up for him,” said Hanson. “Last year he played the role of an under-sized power forward and he could do it because he played such smart defence. Now, he’s leaner, quicker and he needs to shoot the ball.”

How about 53 points over his final two games?

No longer being force-fed to play a back-up point guard spot, he has blossomed at the two spot as a decisive shooter who brings the added bonus of owning a defensive mentality that allows him to guard multiple positions.

“We made a conscious decision to play him at the two-guard spot in the new year and it was the right move,” says Hanson. “And he was a shutdown defender for us. He can guard 6-7, 6-8 guys at the three position and he was able to do it at 6-1 because he is so strong and athletic.”

Michael Provenzano — The 6-foot 170-pound redshirt sophomore point guard very quickly became one of the most exciting players in the conference, and it all starts because he owns one of the best handles in the GNAC.

The rest? It’s his work ethic.

“The one thing we never have to worry about is that work ethic,” said Hanson. “It’s tough to go in and be a leader as a redshirt freshman, but he is that first-in-the-gym and then last-out guy that plays at a high pace and doesn’t get outworked in any drill. I’ve never worried about his intangibles, but we had to get him to understand early on that he didn’t have to do it all.

Provenzano had 15 points, nine assists and three rebounds against Hawaii-Hilo.

JJ Pankratz — From freshman year to now? The first thing you notice about the 6-foot-6 redshirt senior forward/guard is the physique.

“The biggest thing with JJ is how much time he has put in in the weight room,” says Hanson. “He is so serious about his nutrition. He is going to be able to take guys on in the paint this year and that is very exciting.”

Tyrell Lewin — A lack of front court depth pushed the 6-foot-8 junior forward into front-line duty earlier than anticipated, but the trial by fire could pay off this season.

“Where Tyrell is valuable is he’s such an outstanding communicator and smart defensive player,” said Hanson. “He’s a good anticipator and for him it was about getting on him with regards to the weight room. He put his time in over the summer and he’s a lot more confident and athletic.”

Lewin had four points and a rebound Friday against Hawaii Hilo.

N’Kosi Kedar Salam (formerly Kedar Wright) — The former UBC guard came into his own with the Clan last season, and now Hanson is hopeful he will continue to improve as a senior.

“He’s a skilled player with a great handle, and he’s a great shooter who can be a great defender when he wants to be,” said Hanson of the 6-foot-3 Salam. “At the end of the shot clock, he can create his own shot. His stats were good, but he can do more with less shot attempts and he can use all of his skills to be more efficient.”

Jordan Muir-Keung — The 6-foot-1 point guard comes in as a junior transfer out of Bellevue CC.

“He’s a really intelligent player,” says Hanson. “He’s a good, smooth guard, perfect to relieve minutes from Mike. And in our win over Okanagan College, we had Mike, Othniel and Jordan all together, and they can play together with so much speed.”

On Friday, Muir-Keung had six points, two rebounds and an assist against Hawaii-Hilo.

Friday’s win offered a lot of nice signs for the season. 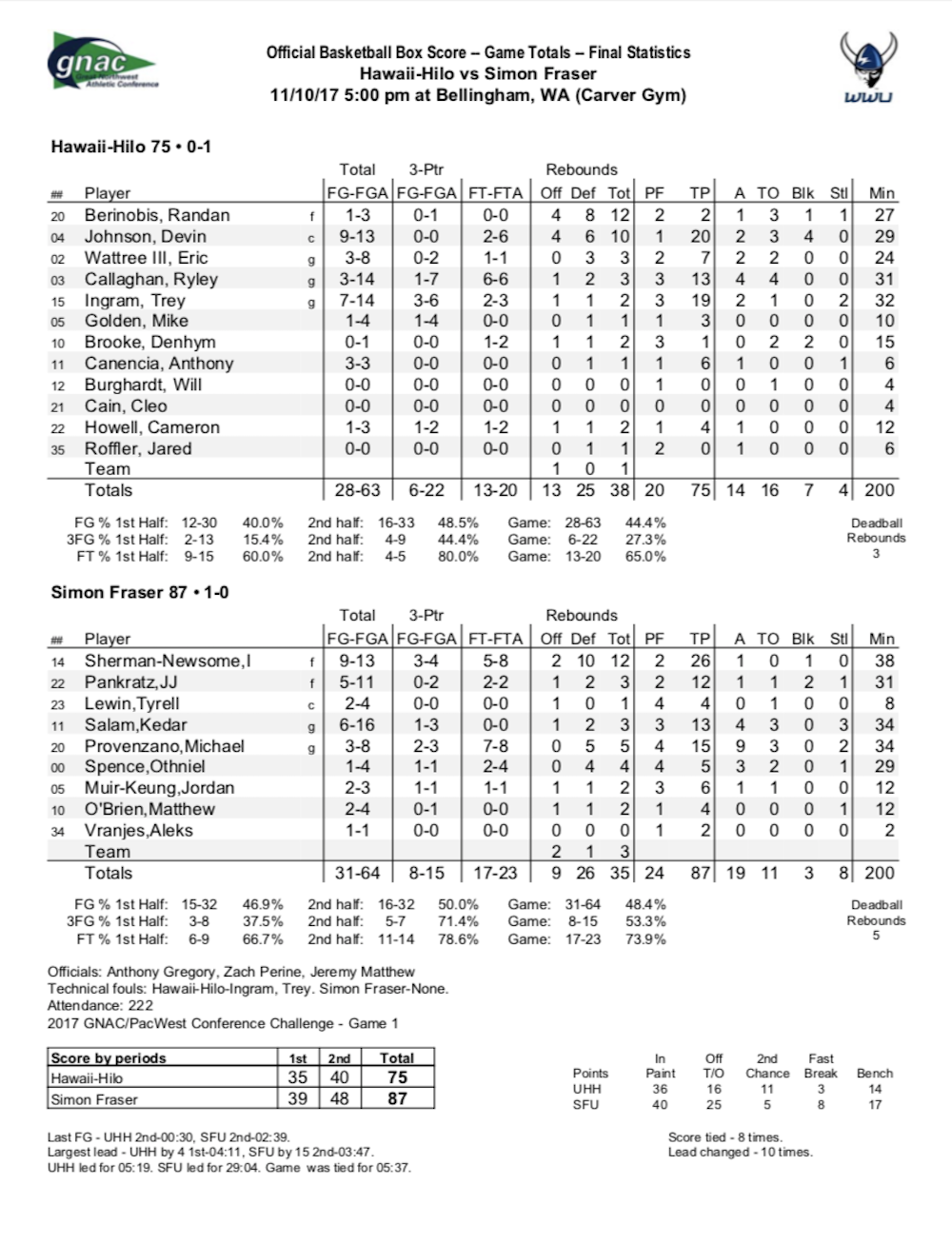