We’re back with game reports from the first two AAAA games of Thursday’s quarterfinal round here at the Langley Events Centre.

Thanks to Wilson Wong, a friend of Varsity Letters, for his photographic excellence tonight!

LANGLEY — The Oak Bay Bays have been leading with their defensive hearts all week here at the Telus 2017 B.C. senior boys basketball championships.

And the guy standing at the front of the line, a player who is making his third straight tour at the LEC with the Victoria powerhouse, is setting the perfect example.

“It’s a consistency on defence for stretches that we have done well with,” said head coach Chris Franklin after the Quad A draw’s final contest of Thursday evening.

“We have guarded the ball well, Jaden had a heck of a second half, Riley Kronk did well when they tried to go to a zone, so I am quite pleased.”

Touchie got plenty of attention himself from the Mouat defence, which forced him into 4-of-14 shooting, but he still scored a team-high 18 points, and on the other side of the ball made a game-high seven steals.

Dhivaan Bhogal led the Hawks with a game-high 23 points and 14 rebounds, while guard Kenan Hadzovic added 16.

“Jaden’s been coming here for three years,” continued Franklin. “He’s a tough kid, the heart of the team, and the rest of the kids follow suit.”

On Friday, his semifinal assignment will likely be the Owls’ Mason Bourcier.

“I just think they that think work really well,” Franklin of the Owls. “They have great energy. Their zone press is very strong and they have fed off that. Good for (head coach Harry) Parmar. For two years they have really bought into that. That’s a very strong team.”

The pair have not met face to face since Kelowna beat Oak Bay 68-47 in the second round of Terry Fox’s Legal Beagle Classic.

LANGLEY  — James Woods has a ton of respect for Luka Lizdek.

On Thursday, with a berth to Friday’s Final Four on the line, Walnut Grove’s Grade 11 guard showed he could do a pretty fair impression of Kitsilano’s incredibly talented senior.

Woods shot a very economical 14-of-22 from the field, tallied a team-high 30 points, and helped lift No. 1 Walnut Grove to a 100-74 win over Lizdek and Vancouver’s Kitsilano Blue Demons.

“We were supposed to contain Luka, but even though he went off, it was still a real team effort,” said Woods, as Lizdek continued to confound opposition defences, scoring a game-high 31 points even though he was once again the man of attention.

“We tried our best but he still played well,” Woods continued. “He is an excellent player. He does a bit of everything.”

So too did Woods, who added nine rebounds, three assists and three steals.

The Gators held the Blue Demons to just 33 per cent shooting from the field, while shooting 54 per cent themselves.

Banking away 10-point cushions in each of the first and third quarters, they came away 26-point winners despite the fact that only two Grove players (Ty Rowell and Andrew Goertzen) got to the free throw line.

Goertzen was 7-of-9 from the field and scored 17 points.

Cort Armstrong had 14 points and Yannick Douguet had 12 points for Kits.

The Gators now move on to face the Holy Cross Crusaders in a Friday Final Four matchup.

“We can’t turn the ball over,” Woods continued of the Crusaders. “They have great defenders and they are so athletic. We have to run a good press break and attack their zones.”

Woods adds that over-confidence is not an issue.

“We’re ranked No. 1 but we stay humble,” he said. “Everyone is gunning for us, but we’ll just stay humble and keep working for the prize.” 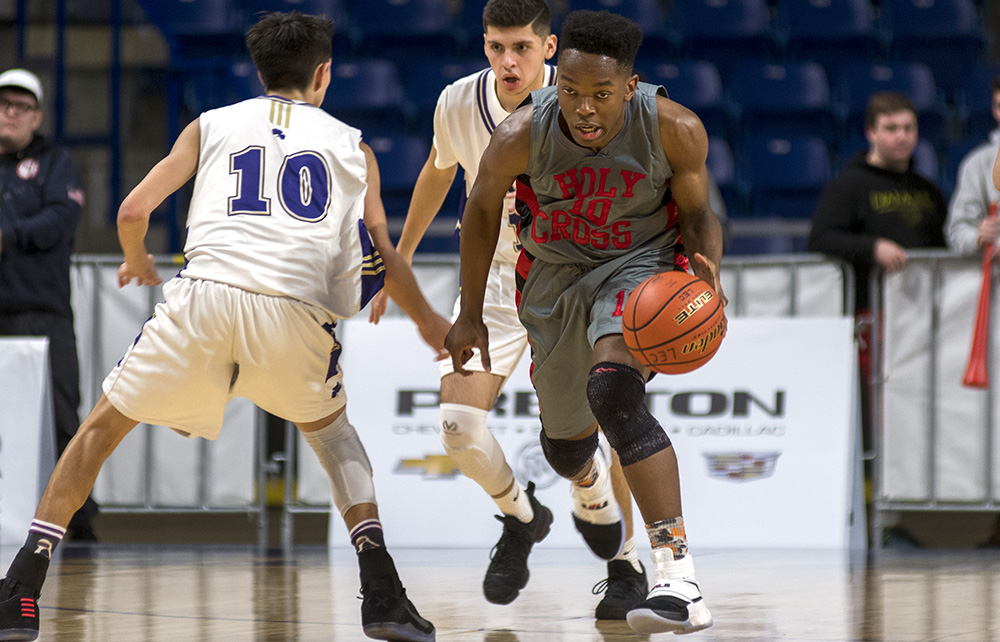 LANGLEY — Uyi Ologhola might have managed one of the most impressive performances in B.C. high school boys basketball championship history on Thursday night.

That is, unless you think there is not much special about a Grade 9 kid scoring 37 points to lead his team into the Final Four, in an overtime game no less, against the Vancouver College Fighting Irish.

“It was just crazy man because I just took my chances and went the hoop and scored and scored and scored and we won,” Ologhola explained after Surrey’s Holy Cross Crusaders choked back a 17-point third-quarter lead to the Irish, then worked themselves out of a four-point pickle with 1:20 remaining to force overtime. “I didn’t expect it. I don’t really have words right now.”

All everyone who saw the performance could say was “Wow.”

Ologhola finished half going 8-of-9 from the field for 18 points, and he reached 30 points with a driving lay-in with 6:49 remaining in regulation that put his team in front 74-72.

When forward Sam Bailey of the Irish scored in close with 1:20 left to make it 84-80, all the Grade 9 did was scored his team’s final two buckets, the last one tying the score at 84 with 31 seconds left.

“He carries our water bottles, he carries our bags when we’re on trips,” smiled Crusaders’ head coach Anthony Pezzente. “The guys treat him like a Grade 9 and he accepts it. This is what this is about. It’s a brotherhood.”

In the overtime, guard Marcus Garcia, whop had been quiet for all of regulation, caught fire, scoring nine of his 13 over the five-minute session.

He played as if Oscar Robertson had been moved to power forward for a game.

“That is why he is our Grade 12 leader,” Pezzente said.

“The Irish, who had rallied from 19 down to beat Yale in its Round 1 game Wednesday almost pulled the trick two nights in a row before running out of gas in an overtime in which they were outscored 15-2.

The Lower Mainland champs last won the title in 1967.

LANGLEY — The Kelowna Owls have had their share of troubles starting fast, but on Thursday, the defending champs punched their ticket to Final Four Friday but bursting out of the gates against Vancouver’s St. George’s Saints.

“A big disadvantage has been our slow starts in big games, so that was a focus,” said Kelowna senior guard Mason Bourcier. “We got a good sweat going in the warm-up and we did it with energy. Right now, we’re playing like a family,”

Bourcier, as usual, was up for the occasion.

On key back-to-back buckets in the early going, he first made two huge strides toward the hoop for a lay-in, then on the ensuing defensive series, stole the ball from St. George’s big man Jacob van Santen and drove in for a lay-in.

From that point, at 26-14, the Owls played with the kind of purpose that puts them a win away from getting the the chance to defend their title.

“We play good defence, I believe we do  and today you saw the way we can play defence,” said Kelowna head coach Harry Parmar. “That is a good team that we basically held to 30 points.”

Bourcier was once again huge.

While hinting that a quad-double was possible, he put up 25 points, 11 rebounds, seven assists and seven steals.

And while it’s a very different Kelowna team trying to defend its title here at the LEC this week, Parmar loves the way his guard has moved from a supporting role last season to driving the bus into the Final Four.

“Last year he was a spoke in the wheel,” Parmar said of a team which included the likes of tourney MVP Grant Shephard and star guard Parker Simson. “This year he is the rubber.”

The traction he gave the Owls down the stretch drive was every bit as strong as the key leadership provided last season.

In the third quarter, with a defender right in his face, and with no ability to shoot in rhythm, Bourcier rose, faded and gutted home a step-back three that made it 56-27.

“This year we got off to a bit of a slow start,” said Bourcier, whose Owls will face the winner of tonight’s late semifinal between W.J. Mouat and Oak Bay. “But we are learning and we can beat any team in the province. We have the same work ethic and the same grit (as the 2016 Owls) and I think anything is possible.”

The Byrne Creek Bulldogs and the Lord Byng Grey Ghosts know each other so well, an amplification of the stakes was sure to create an instant classic.

Just such scenarios, however, produce elation and heartbreak and that was the canvas on which the ninth meeting in two seasons between the pair of Triple-A heavyweights unfolded on Thursday in the quarterfinal round of the B.C. championships.

Before a rapt audience on centre court at the Langley Events Centre, the Grey Ghosts worked themselves to a final shot to tie the game.

Yet in the end, it was Burnaby’s Bulldogs who came away victorious over the Grey Ghosts, aiming for their first Final Four in exactly 40 years.

The victory sends the Bulldogs into a clash with the South Kamloops Titans on Friday.

LANGLEY — The future is so bright for the South Kamloops Titans, but it’s safe to say the same thing is true for their present.

Led by a core of dynamic Grade 11s, the Titans burst out of the gates in the opening quarter against Abbotsford’s Robert Bateman Timberwolves, leading 23-10 after the first quarter and never looking back the best of the evening.

Nick Sarai led the winners with 18 points, 10 coming in the third quarter.

All three are Grade 11 for head coach Tim Unaegbu, who also got 15 from senior Quin Adam.

LANGLEY — The defending finalists weren’t going to go down without a fight.

Yet losing a player many would call the province’s most dominant big man did not help matters for the Steveston-London Sharks against a determined and driven group of Bruins from Bodwell High School in North Vancouver.

Locked at 61-61 in the late stages, the Sharks were forced to play without 6-foot-10 centre Fardaw Aimaq who fouled out with 1:47 remaining.

The Bruins finished the game on a 7-0 run and earned a berth in Friday’s Final Four against the Fraser Valley champion Rick Hansen Hurricanes of Abbotsford.

Grade 11 small forward Seckin Topar led the winners with a game-high 26 points, 16 of which came in the second half.

Arda Coban added 12 points, and Yagiz Torer and Canberk Gungor 10 in the win.

Bodwell led 23-8 early in the second quarter, then hunkered down for a Sharks’ rally that ultimately came up short.

Zack Cantwell and Aimaq each scored 21 points in the loss.

LANGLEY — The Rick Hansen Hurricanes were a team looking for some wind in their sails on Thursday night, and when it finally arrived, they came on like a force of nature.

When Knights’ Richard Galicia scored on a hook shot with 4:04 left in the third quarter, STM had built a 45-25 lead.

But then steadily, the Fraser Valley champions from Abbotsford fought their way back, eventually seizing a heart-stopping 61-59 overtime victory which sends them to Friday’s Final Four.

“We were down 20, it was unreal,” said Rick Hansen head coach Steve Twele. “We worked a lot on our mental toughness. We’ve been in the classroom learning about it and today it showed. It was amazing.”

“We weren’t moving the ball early,” said Twele. “We were too individual. But we finally found a way to get things moving and get it together. Hopefully we’re going to have more stories to tell.”