None of the fan bases from any of our quartet of survivors wants to hear that our committee couldn’t make a bad choice, but the truth is, these are saw-off matchups.

Coins were not flipped, but hard decisions were made.

And while VarsityLetters.ca did not play a role in picking the winners, we are honoured to provide some of the background which we hopes brings these fanatasy matchups to life.

We’ve heard from so generations of players and coaches over the past few weeks and we are gob-smacked by the passion you continue to show for our great game.. 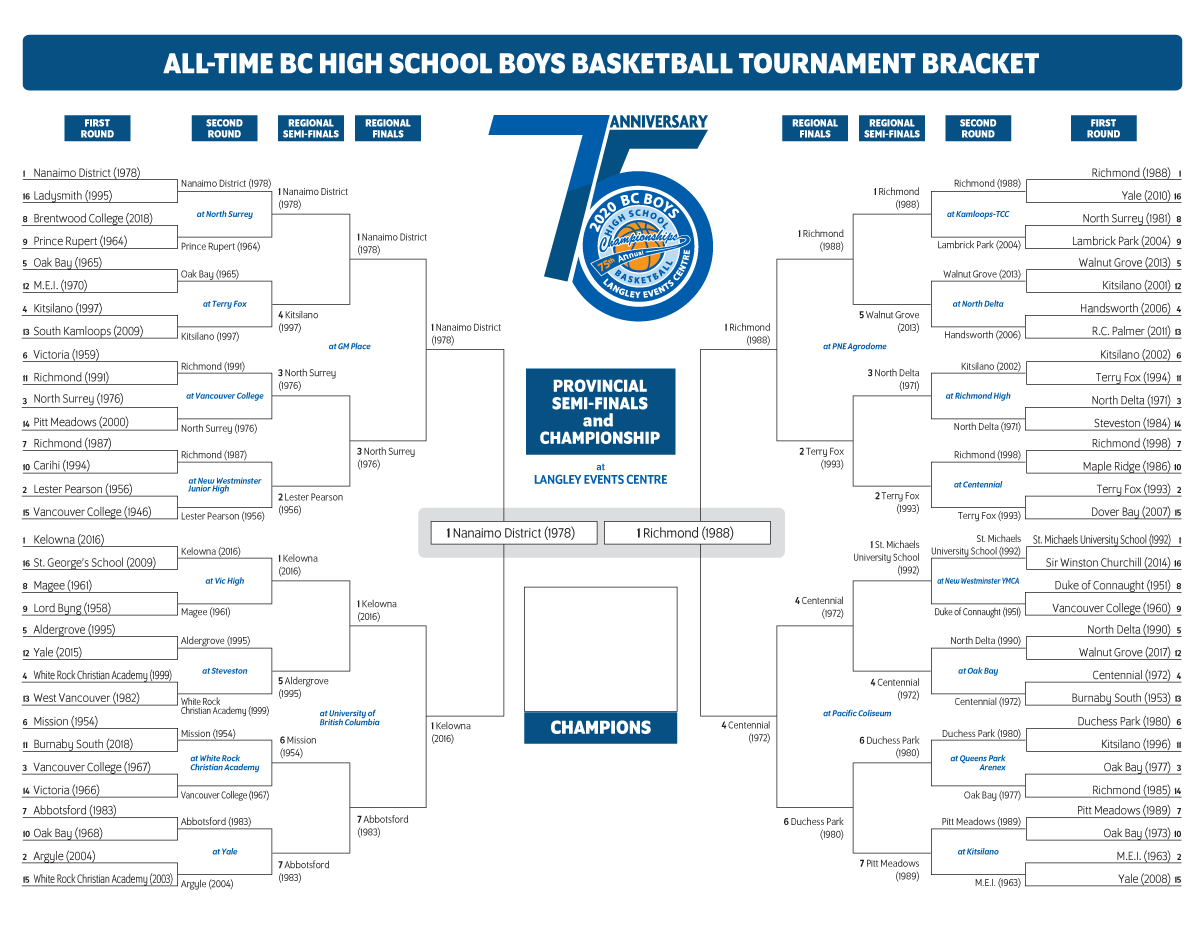 For a higher resolution version of this draw, click here

LANGLEY — There have been some dynamic groups of blood brothers in the world of B.C. high school basketball, but it’s not often when three of them are on the same team and all wind up playing huge roles on one of the greatest teams in provincial history.

Ask Gerald Kazanowski about his older twin brothers John and Greg Kazanowksi, and you get a great feel for the kinship that was a built-in part of the 1978 Nanaimo Islanders.

“We grew up in a small house, and my mom was always trying to get us outside, so we played softball, soccer and basketball,” Gerald relates.

By the time the 1977-78 basketball season rolled around, the hardcourt was their domain, and teammed with the likes of 6-5 forward Paul Davis, 6-2 forward Colin Tinga and 5-9 guard Mark Spees, head coach John Levering’s unit was about as tight as you could get in terms of chemistry.

And although Gerald was the one who attained the most acclaim, starring with the Victoria Vikes, facing the original 1992 Dream Team as a member of the Canadian National team and beign drafted by the Utah Jazz, the little brother tells a different story.

“They were better than me,” he says of Greg and John. “In the 1978 year we were in nine tournaments and in seven of them Greg was the MVP. He was a phenomenal offensive player. He was our scorer, John was our defensive specialist and point guard, and I was out rebounder.”

Yet could they match the depth of the 2016 Kelowna Owls, a 10-deep group which if kept together through university, may very well had a chance to grow into one of the top teams in the Canada West with Parker Simson, Grant Shephard, Matt Lafontaine, Davide Ciancio and Mason Bourcier providing the foundation.

“Our compete level was huge,” Kelowna head coach Harry Parmar remembered. “I’ve had players from that team tell me that our practices were tougher than their university practices.”

The moment Parmar was convinced of the strength of his team came at the prestigious REB Invitational in Edmonton that season, when the Owls lost a two-point lead over the final seconds of play in a loss to Riverside-J.W. North, at that stage sitting at No. 12 across all tiers in the state of California.

And so that set the stage for this fantasy clash between teams produced some 38 years apart.

The match-up with the fleet-footed, 6-foot-10 Shephard is the toughest battle of 6-foot-6 Gerald Kazanowski’s high school career.

And an Owls’ team able to play virtually any style it wants, has Bourcier hounding John Kazanowski from start to finish.

Somehow, however, the basketball gods shine on Nanaimo.

It all starts with winning a few 50/50 loose ball battles, which the Isles turn into fastbreak hoops.

Then once that Nanaimo running game gets going, it gains quick traction, and in the end, it’s a few easy baskets from a surge early in the third quarter of this fantasy semifinal which allows things to fall the Islanders way.

Forty years after their last B.C. high school championship game appearance, our panel picks the Hub City crew to play next week for all the spoils.

LANGLEY — Bill Disbrow has so many incredible memories from his time at the helm of the Richmond Colts, but perhaps one stands above all others when it comes time to gauging both just how good his 1988 repeat champs were, and how intimidating they were, to boot.

“It wasn’t like today when everyone could get on the floor and have their 10 minutes to shoot-around,” Disbrow remembered of the prep time afforded teams to get on the floor at the then-PNE Agrodome back in the 1980s just prior to the start of the provincial tournament.

“Everybody used to get on the floor at the same time,” he continued. “I remember that year, we arrived and there were probably 10 teams out there. We show up, and every player there just moved to the other side of the floor and watched us. It was just a whole different deal.”

It was also an era in which local sports TV found the time to cover high school sports on a much larger basis.

And in Disbrow, a natural-born promoter who also happened to have developed a dynamite team, it was a combination made in heaven.

Besides being potentially the greatest high school team ever in B.C., their ability to pioneer big-time exhibition games against U.S. giants like DeMatha and St. Anthony’s, made them just as important in creating an audience for the game in this province.

“I think they were easily the most influential team as well,” Disbrow says of his 1988 champs. “You can talk about how dominant they were, but they were also so popular. They were in the news constantly.”

The question is, do they have the stuff to slow Centennial’s Lars Hansen, the 6-foot-10 tower of power who in 1972 was Wilt the Stilt-like in his powers,.

“The 1972 team were a great group of unselfish team players,” caoch Gordon Betcher said of his squad. “Most of our opponents had strategies designed to stop Lars. He had to adjust as did the rest of the team. Lars developed so much in his Grade 11 year. In that year all of the teams in the Cross Mainland League had big and good centres guarding him, but by our final game for third spot in the 1971 tourney Lars dominated the game and was named MVP.”

Of course, opposition coaches, like Disbrow in this fantasy matchup, were always looking for new ways to find vulnerabilities in the Centaurs’ schematic.

Betcher, well aware of this, appreciated the versatility and the willingness of his star to make the counter schemes pay off.

“Because teams used full court presses against us I had him come back to break the presses,” said Betcher. “For his Grade 12 year he dominated play against all teams, despite sometimes having two to three players checking him. We had to play a 1-3-1 zone because our opponents would try to draw Lars outside and he often got into foul trouble.”

In this fantasy game, however, a Richmond team which went two straight seasons without losing to a B.C. foe, was in its element.

Pressure defence plays a huge role, as does the Colts’ transition game, with Joey deWit denying the Centennial guards and not allowing Hansen to get his touches.

Ron Putzi, meanwhile, continued to play bigger than his 6-foot-6 frame, and in tandem with the likes of Andrew Zawada and Graham Lindsay is able to create the kinds of turnovers that feed right into the playmaking wheelhouse of point guard Brian Tait.

One thought on “…And then there were two! The Diamond Jubilee 75th anniversary fantasy bracket produces our two all-time boys team finalists!”