BURNABY — The Simon Fraser Clan have added a slam-dunk recruit to the roster of its men’s basketball team.

“When I told him that the leading guy on our team this past season had 12 dunks, he told me that he led Oregon (high schools) with over a hundred,” said Hanson of O’Brien, also an adept long-range shooter and shot-blocker who will become the tallest player on the SFU roster next season.

Watch the highlight reels of O’Brien at work this past season on a team which played at its state’s highest tier, and it’s easy to think that the Clan got a real steal in a player who will team in the front court with the likes of returning vets Tyrell Lewin, Graham Miller and Iziah Sherman-Newsome.

O’Brien weighed his options beyond the April 12 signing day and eventually chose the Clan, both for the opportunity to contribute to the improving GNAC squad, and for the level of education the school provides.

Hanson’s first comparable when projecting O’Brien’s development over the four-year eligibility window? None other than UBC’s rising fifth-year senior Conor Morgan, who at 6-foot-10, led U Sports in scoring this past season.

“He has a ton of upside,” said Hanson. “(SFU assistant coach) Bret (Macdonald) has played with Conor (at UBC) and he thinks Matthew could be like Conor. He shoots the ball so well right now that he’s he is right there with our best.” 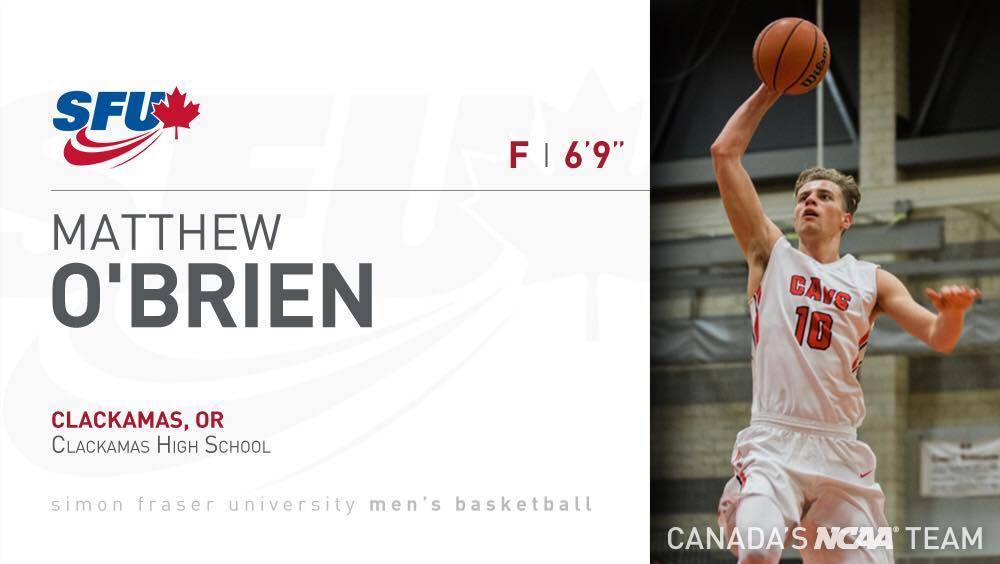 He’s also no slouch as a shot blocker.

Hanson watched a quarterfinal game at the prestigious Les Schwab Invitational on Dec. 28 in Hillsboro, Ore., in which Clackamas pulled to within seven of national powerhouse Nathan Hale of Seattle down the stretch drive of the game before losing 82-75.

In that game, against a team which would go on to finish No. 4 in the USA Super 25 national high school rankings, O’Brien was Clackamas’ second-leading scorer with 13 points, trailing Div. 1-bound (Portland State) teammate and point guard Elijah Gonzalez who had 29 points.

O’Brien even had a memorable moment against the game’s leading scorer, 6-foot-10 forward Michael Porter Jr., who just happens to be the consensus No. 1-ranked high school player in the 2017 class.

“In the game I watched,” said Hanson, “he blocked Michael Porter Jr.”

Porter, who finished the game with 30 points, will play next season at Missouri for head coach Cuonzo Martin, the former Vancouver Grizzlies guard.

As for O’Brien, whose high school team went undefeated in league play for two straight seasons, finishing each with respective quarterfinal and championship final berths at the state tournament, SFU offered an academic component that was hard to pass up.

“His mom is a teacher and education was a big part of it for him,” said Hanson of O’Brien, whose older sister Lauren is a 6-foot-1 middle blocker at Utah State.

Hanson also like the winning environment his latest recruit contributed to throughout high school.

“He’s played against the best in U.S. high school basketball,” said Hanson of O’Brien, who averaged 14 points and 10 rebounds per game as a senior and was honoured as a second-team all-star at the Oregon 6A championship tournament.

“Not many get a chance to play against a team the calibre of a Nathan Hale. He has so much upside. He played centre most of his high school career but he can stretch the floor and we hope he can be a real match-up nightmare. We think he can play some five (centre) but long-term, he’s a stretch four. His biggest challenge, in a conference where so many teams play three or four guards, is going to be guarding smaller players. But he is so quick, and so quick off his feet.”

With 10 returning players, SFU’s recruiting class is now four deep with the signing of O’Brien.