LANGLEY — The greatest of all time?

It’s an eternal question… a question that in almost every instance shy of undiscovered scientific technology, ultimately provides no clear-cut answer.

But oh, what fun we can have debating this one: Which team is the greatest in the 75-year history of the B.C. senior boys high school basketball championships?

The basketball gods can only ask that you carry a little of that good-natured spirit with you as we here at VarsityLetters.ca take you along on a 35-day journey to crown our fantasy champion.

From today through March 3, the latter date landing us a day ahead the official tip-off of at the 75th B.C. boys tournament at the Langley Events Centre, we will present the 64-team draw, and play through each of the subsequent six rounds.

Come Friday, right here at VarsityLetters.ca, we’ll present the results of the first round of play. 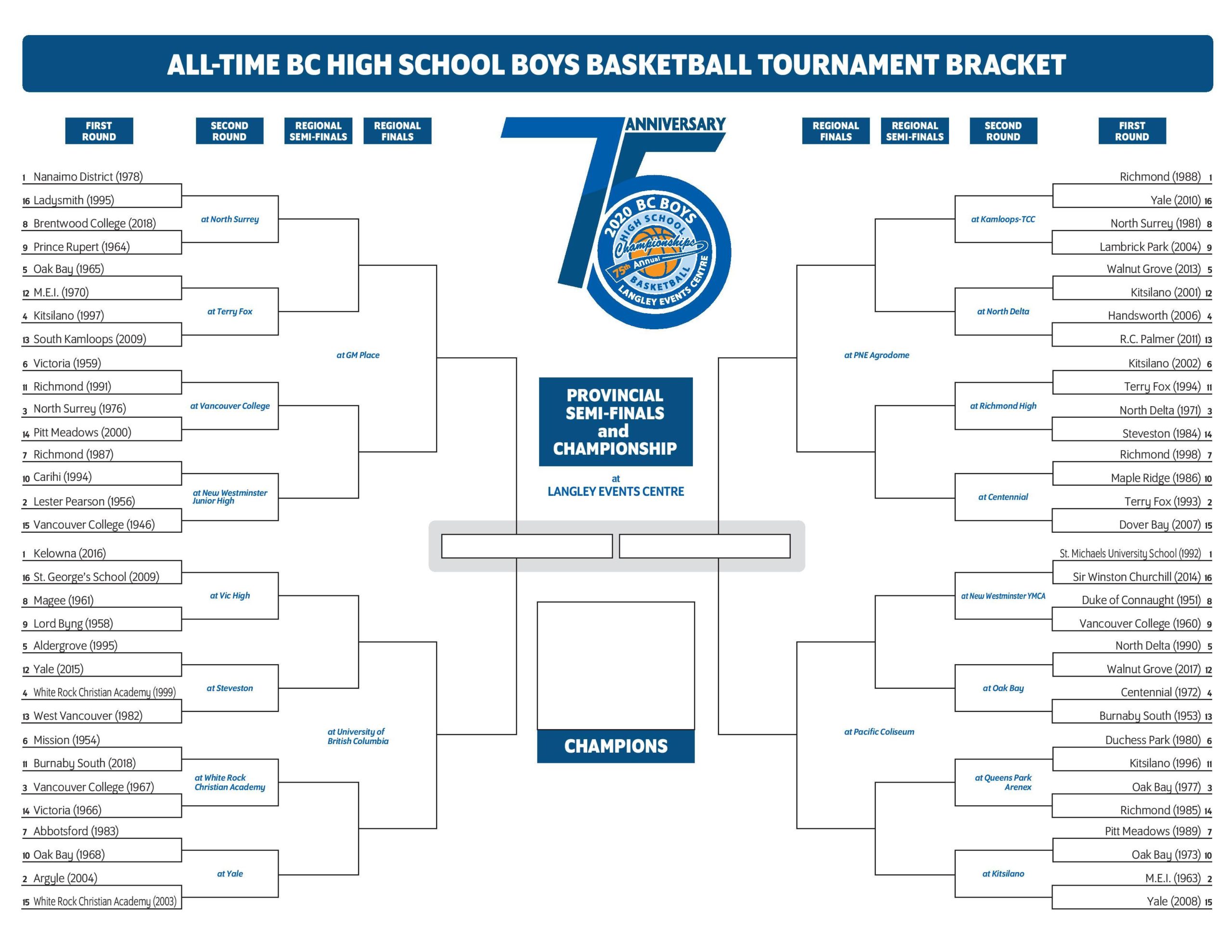 Now, to explain some of the process involved here: (BTW — here’s a link to a higher-resolution version of the draw)

*As early as this past summer, a number of veteran coaches and administrators, all with a long-standing love-affair for the B.C. high school game, were asked by the B.C. High School Boys Basketball Association to begin considering which teams they would consider worthy of being part of an all-time 64-team bracket.

*It was considered a given that the vast majority of teams selected would have been provincial championship tournament winners, and that the large majority would come from whatever the largest tier classification of the day happened to be.

Remember, the B.C. tournament started as a single-tier championship in 1946 and remained that way until 1970 when it became Double-A with the introduction of a Single-A tier.

Then, in 1988, the era of Triple A began, one which would remain constant for a quarter-century until the Quad-A era began in 2014.

And for the most part, the top-tiered champs reigned supreme.

There, were, however, some exceptions.

Two non-top tiered teams made the cut in the form of the 1995 Aldergrove Totems, coached by Neil Brown, and 2018’s Brentwood College, coached by Blake Gage.

The Totems, noted as one of the most polarizing teams in the history of B.C. high school basketball, were a juggernaut, led by stars Randy Nohr and James Maksymiw.

That season they topped cross-city rival D.W. Poppy 82-62 in the B.C. Double-A final.

*As well, the panel selected a pair of top-tiered teams which did not even play in the final.

The 1994 Carihi Tyees lost 79-76 to the Terry Fox Ravens in a Final Four heart-stopper which, to that point, was considered the best game in the history of the tournament. Head coach Rich Chambers’ Ravens would go on to defeat Richmond one night later to win the title.

Interestingly enough, in both instances, the tournament MVPs did not come from the winning or second-place teams, but from those third-place teams.

Yet if you ask Carihi’s Eric Hinrichsen and South Kamloops’ Kelly Olynyk, the latter currently starring with the Miami Heat, both would gladly trade their MVP trophies for being a part of B.C. championship teams.

*We also hope you can appreciate the significance of the tournament venues in our fantasy play-downs.

Of course we are playing our fantasy finals right here at the Langley Events Centre, and our four regional finals pay honour to four other former B.C. tournament championship sites in UBC’s War Memorial Gymnasium, the Pacific Coliseum, the PNE Agrodome and GM Place.

We’ve selected iconic gyms as a grassroots homage to the places where some of our greatest have played the game.

As are school gyms at Terry Fox, Vancouver College, Yale, North Delta, Centennial, Oak Bay and Kitsilano, where as of late, the student body has continued to have the chance to support B.C. title-contending teams.

*Some of my early faves, on first glance, include Richmond 1987 vs. Carihi 1994, Walnut Grove 2013 vs. Kitsilano 2001, and North Delta 1990 vs. Walnut Grove 2017. I’ll admit they tickle my fancy because I watched all of those teams in person at some stage of their seasons. I’m sure you’ll have your favourites as well. I’m just glad I can stand back and observe this process as a fan.

*Having to leave any title-winning teams out of the mix was excruciating for the selection committee (of which VarsityLetters.ca was not a part of).

Then imagine trying to seed just such a beast, knowing that while today’s athletes and teams have the huge edge in any number of resources from diet, training, facilities, etc, that it is still hugely important to pay huge respect to how good all these teams were for their day.

*And finally, harkening back to the spirit of celebration we first spoke of, we hope there is an understanding of the big picture of what an all-time fantasy tournament is really supposed to represent!

Just like the weekly Top 10 rankings, our 64-team fantasy tournament is meant to create discussion as much as honour the excellence we have all had the pleasure to appreciate at various stages over 75 years.

To know that you belong, whether represented in the 64 teams or not, all you have to do is ask yourself whether or not you played on a team which had a goal to try to get to the provincial championships.

Whether you got there or not, you helped create an atmosphere which remains special to this day, and you also discovered how incredibly hard it is just to make it to B.C.’s.

With all that said, let’s enjoy our countdown to the diamond anniversary of our great tournament in the best way we know how.

See you at the LEC

4 thoughts on “The bracket unveiled: The 64 greatest BC high school teams plug themselves in for a 75th anniversary ‘diamond jubilee’ run to March Madness”