LANGLEY — All teams talk about their journey.

In 2021, the girls Tsumura Basketball Invitational has got a story to tell as well.

From our own cancelled 2020 tournament, we re-invited the entire field to join us in ’21.

A huge number of teams were able to say ‘yes’, but others, for various reasons, most heartbreakingly those with the inability to travel, had to back out.

And thus our journey, through four different versions of a so-called ‘final’ draw, has finally hit the home stretch with a re-seeded, re-drawn version 5.0 18-team draw which will hold through Wednesday’s opening round and to the conclusion of our Saturday finale, which if you have ever witnessed in the past, is indeed a celebration with games taking place from morning to night in two different gymnasiums.

First, a shout-out to our two Thompson-Okanagan schools who have become a part of the fabric of our event. The defending TBI champion and No. 2 Quad-A ranked Okanagan Mission Huskies, and the Quad-A No. 5-ranked Kelowna Owls had both fully intended on competing for all the spoils but had to pull the plug due to their travel issues.

Secondly, thanks to the new teams who were able to juggle schedules and find a way to replace others teams electing not to play as originally scheduled.

But don’t think for a second that TBI 2021 isn’t as complete a look at B.C.’s top girls basketball teams as you’ll see.

And from Double-A, we’ve got No. 1 Langley Christian and No. 2 St. Michael’s University School.

Only five of our 18 teams aren’t currently holding either ranked or honourable mention status as the countdown to Wednesday’s opening tips begins. 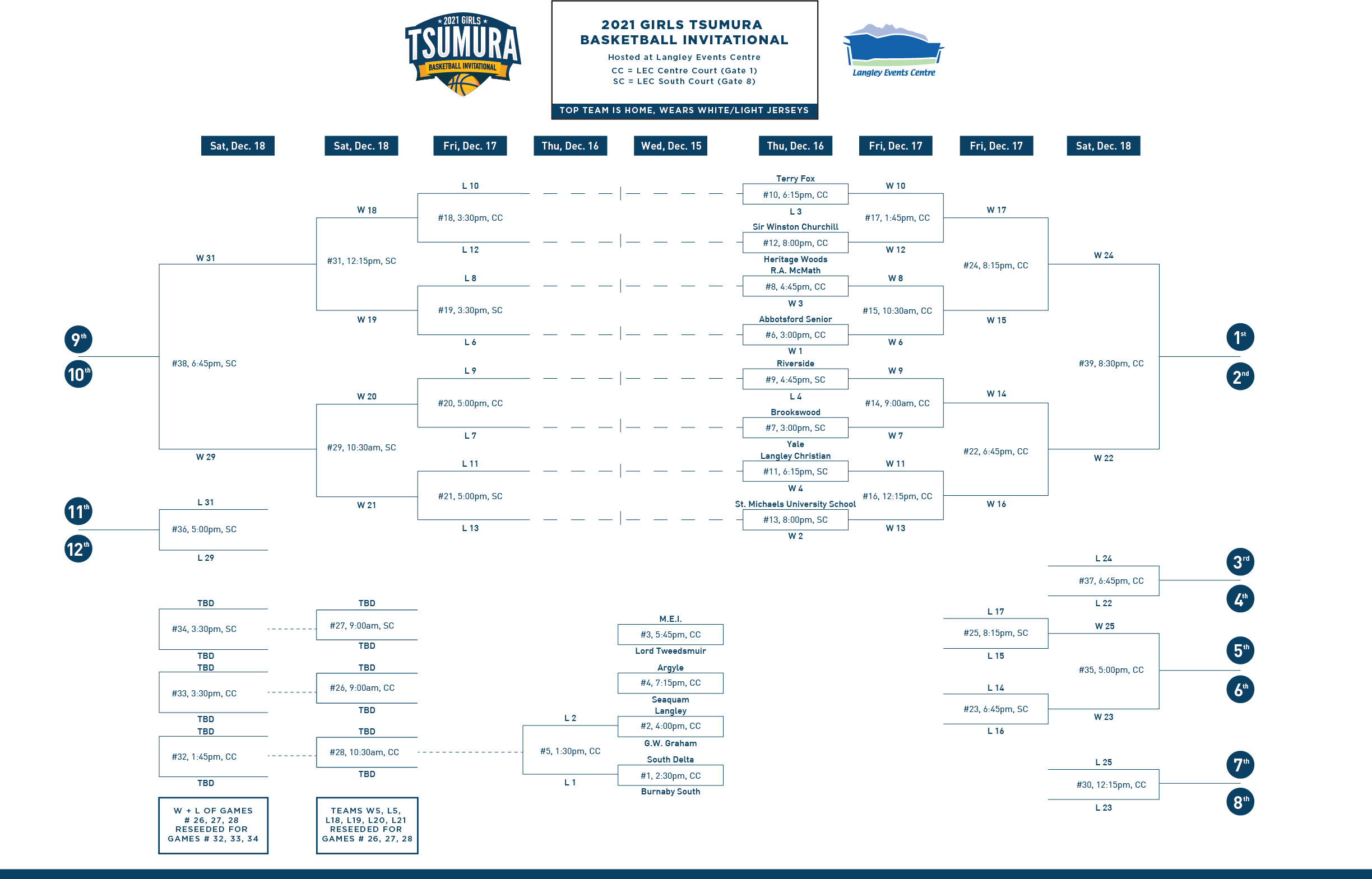 Let’s also get to the draw itself.

While I was engrossed in all of my duties last week covering the TBI boys tournament courtside at the Langley Events Centre, our erstwhile tournament committee took on the tough task of coming up with an 18-team tournament draw which strove to honour as much of the most previous draw’s integrity in terms of start times, the scheduling of officiating and the travel scheduling of teams from around our vast province.

At the same time, a hard decision had to be made in terms of how teams advanced from Wednesday’s opening-draw of eight teams into the larger 16-team bracket which plays itself out the remaining three days leading up to Saturday’s championship.

Normally, all four winners from Wednesday’s play advance to the round of Sweet 16.

This season, however, with highly-ranked Kelowna and OKM — each a part of that 16-team portion — unable to participate, we had to pull six teams from Wednesday into that main grouping.

In created an inequitable situation and the hard decision that this season, within the new format, that two of the losing teams from Day 1 would not be able to move into the main draw.

Instead, the losers of both the G.W. Graham-Langley, and Burnaby South-South Delta games will first, face each other, then both advance into a a series of six-team pools, each re-seeded to insure new opponents.

To those teams affected, from the bottom of my heart, I hope this does not lessen your team’s TBI experience, which will include multiple games on the Centre Court hardwood, the very home of the B.C. championship final games this March.

As last week’s boys tournament progressed, I was most heartened by the fact that coaches and players from all teams carried, above all, a gratitude that we were all back together again, competing, and finding just how much we missed the most important thing within the B.C. high school basketball community: Our sense of togetherness and connection through this great game.

I look forward to seeing all of the coaches and players this week at the LEC.