SURREY — Last season, the Fleetwood Park Dragons showed themselves as one of those teams capable of pulling off the big upset.

Remember the Dragons’ 82-78 overtime loss in its league championship final to the same Holy Cross Crusaders’ team which would go on to beat both eventual B.C. champion Lord Tweedsmuir and powerhouse Terry Fox in back-to-back games to claim the Fraser Valley Quad-A championship title?

And that was a Dragons’ team boasting a largely Grade 11 core.

Now, with four senior starters led by Amrit Bassi, and Grade 10 Ravi Randhawa joining them in the starting group, the 2019-20 Fleetwood Park team you will see come Wednesday in the opening-round of the Tsumura Basketball Invitational at the Langley Events Centre, is a team with legitimate Big Dance aspirations come this March.

And if they make that goal come true, they’ll find themselves right back at the LEC for B.C. Quad-A provincials some three-plus months down the road.

“We’re still trying to figure things out but I like the make-up of this group,” begins head coach Nick Day, who has guided his seniors since moving down to take them as Grade 8s for the 2015-16 season. “It’s a veteran group and there is a maturity to our game which will show as the  year goes on.”

Just as they did his last week in splitting four games at the Heritage Woods Kodiak Classic in Port Moody, the Dragons will get all they can handle from the TBI’s first-ever 20-team field, one which Fleetwood Park christens with a 2:30 p.m. tip-off Wednesday against Richmond’s young-but-emerging R.A. McMath Wildcats, a guard-savvy group which last season lost to Vancouver College in the B.C. junior varsity title game.

Day knows the pressure-cooker schedule of the Kodiak Classic and TBI in back-to-back weekends can go a long ways towards upping the intensity level of his team, and if they start to hint at their potential before Christmas, what will basketball fans see?

“At our best, we’re dialled in at both ends of the floor,” begins Day, whose team fell one win shy last season of advancing to the Fraser Valley’s 7th-8th place winner-to-B.C.’s game. “It’s not complex. We want to keep the ball moving and play unselfish basketball. But the biggest part of our identity is we don’t want to trade baskets. We want real intensity in our half-court defence.”

Bassi, who in his past has battled injuries, best exemplifies that trait.

“He’s our best defender and no doubt, he takes pride in it,” Day said of the 5-foot-11 combo-guard who leads a senior quartet which also includes swingman Bhavrup Gosal, who last season hit the big shot against Holy Cross to force overtime, Divjot Pataria and lengthy Abishek Kanagasabay.

And while last season’s efforts didn’t translate into a B.C. Quad-A tourney berth, there is no question it laid a huge foundation for this coming season.

And one of the spin-offs from 2018-19 was the fact that Randhawa and Bassi got to spend an entire season together as respective Grade 9 and Grade 11 talents, learning each other’s tendencies.

“It has really served to remind each of them just how capable the other is,” Day says of the trust and respect built between the pair. “When the time comes now, they’re not afraid to give it up. They spent a lot of time training together over the summer.”

The winner of Wednesday’s 2:30 p.m. Fleetwood Park vs. R.A. McMath contest advances to the Sweet 16 on Thursday to face Coquitlam’s powerhouse Centennial Centaurs.

Also Wednesday (all games on the LEC’s Centre Court):

Here’s the full tournament draw which runs through Saturday: 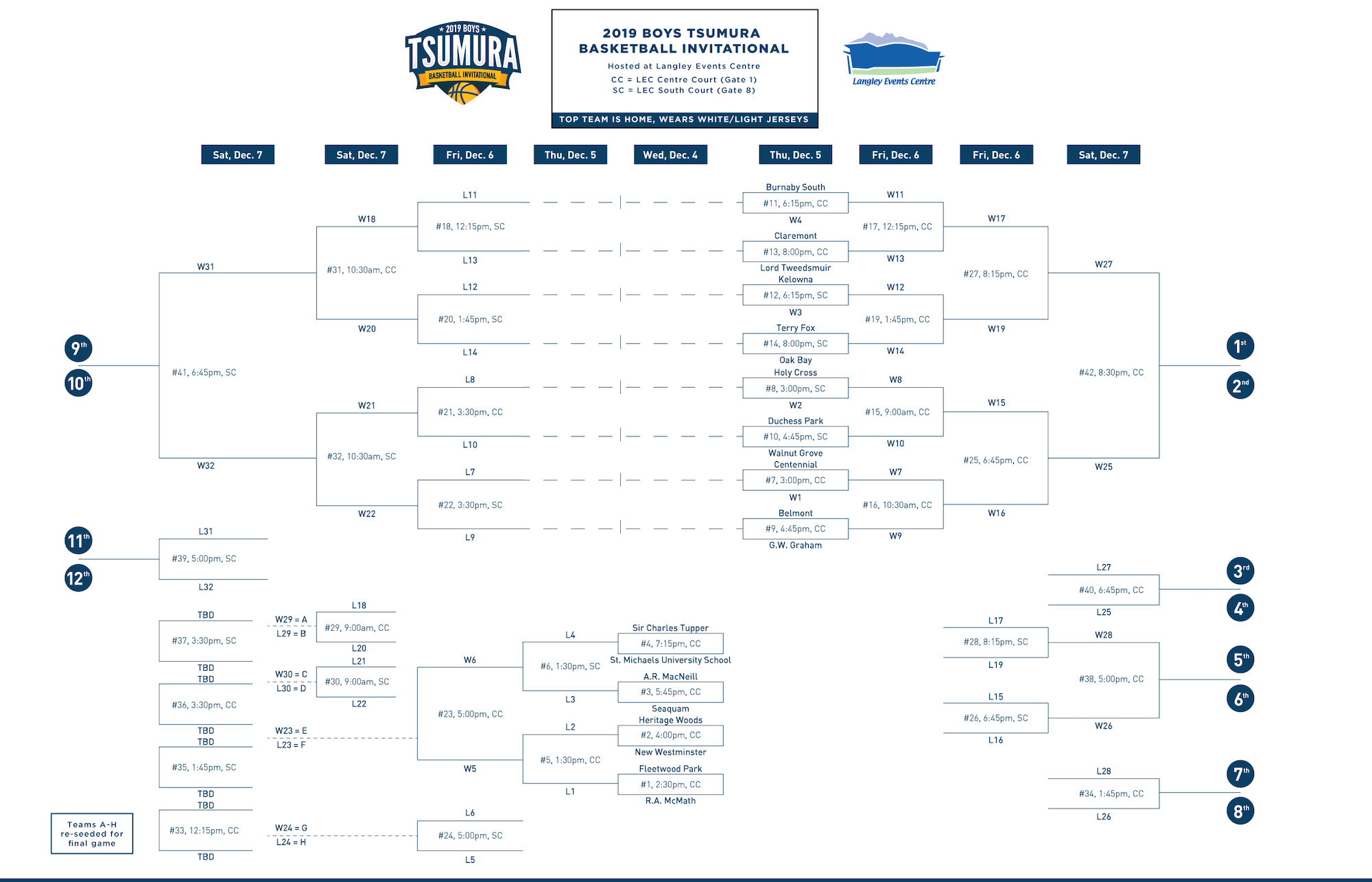