BURNABY — Lauren Fridman always felt she had a second wind as a collegiate athlete, yet she never figured it would be strong enough to sweep her off her feet and give her the ride of a lifetime.

How else can you begin to describe a story so folksy and unexpected that it surely ranks as one of the true feel-good stories of the NCAA’s 2018-19 sports season.

Fridman, a red-shirt senior outside hitter from Calgary, had wrapped up her final season with the Clan volleyball team in November, yet while continuing her studies towards a degree in biomedical engineering over the months that followed, she could feel in her bones that her collegiate sports career was not ready to be over.

So before the start of the outdoor track and field season, Fridman sent an e-mail to Clan head coach Brit Townsend, wondering if there was a chance she could  join the team and throw the javelin, despite the fact it was a discipline she had deserted about six years ago.

“It was very last-minute that I sent the e-mail,” Fridman, 22, laughed earlier this week. “It’s something that I had been thinking about since my third year here. I had this idea that I wanted to do something else (after volleyball) that was athletic. I wasn’t sure if it would pan out. I had to see how my body was holding out. But it was just a vague idea.”

On Tuesday (May 21), Lauren Fridman boarded Simon Fraser’s team flight to Texas, where against huge odds, she has qualified to throw her javelin at the NCAA Div. 2 national track and field championships set to run Thursday through Saturday.

Go ahead, call her the ultimate underdog.

She’s OK with it.

After all, just take a quick glance at her meet event list below and you’ll see that of the 23 throwers who qualified, she’s the 23rd.

“I think everyone is just as surprised about this as I am,” Fridman laughs with pride.

Ahh, the beauty of sport. 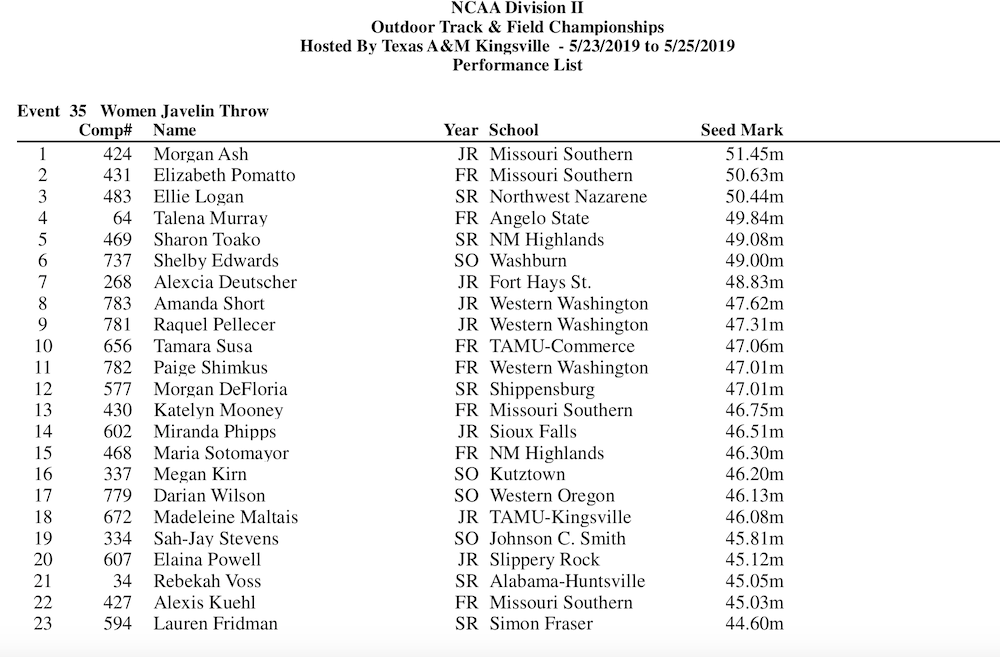 Clan track coach Brit Townsend, a former Olympian, knows a great story when she sees one.

Yet even though this out-of-nowhere tale involving one of her own athletes has unfolded with a Cinderella-like narrative, it is also a testament to vast physical and mental makeover a student-athlete undergoes over a four-to-five year eligibility window of a university sports career.

It’s so vast, in fact, that it even aided a transition of a most curious 11th-hour switch of sports.

“Absolutely, my volleyball career has been integral to this,” begins Fridman who while competing at Calgary’s Webber Academy as a multi-sport athlete eventually gave up both javelin and basketball as she focused on her future scholarship sport out west atop Burnaby Mountain. “I wouldn’t have done anywhere near as well with (javelin) this season without it.

“I got stronger, a lot more mentally tough and I matured as an athlete,” she continued. “As I have come to an individual sport, where it’s all on you, my volleyball experience has been the difference.”

Townsend, in fact, suggests Fridman couldn’t have found a better pairing of sports based on the skill-set requirements of both.

“She has been training in volleyball for five years (including a 2014 redshirt freshman campaign) and a lot of her overhead moves, when you are spiking the ball… it’s very similar to throwing (a javelin),” Townsend says, “because you’re jumping, using a lot of your upper body and getting full arm extension.”

Ask the near-rookie thrower about it, and she is quick to simplify her process.

“To be very honest my technique is not flawless,” Fridman chuckles. “I am a bit of brute force thrower, but I make that work for me. I haven’t had the time to perfect things, but the good thing is, I do have strength.”

Thus for Fridman, her surprising run to become just the second Clan woman to qualify for NCAA nationals in a field event (Nanaimo’s Jade Richardson (discus) was first in 2013) might not be a complete overnight success story.

By the time she had reached her Grade 12 year at Calgary’s Webber Academy in 2013-14, Fridman had pretty much given up the javelin in order to concentrate on volleyball and joining a renaissance Clan program which would reach double-digit GNAC conference victories and beyond in all five of her seasons under head coach Gina Schmidt.

In that Grade 12 season, however, Fridman still threw in a couple of meets, including the Alberta High School championships in which her throw of 33.79 metres put her on the award podium with a silver medal.

After all of that time off, however, having never even touched a javelin, steady progress was itself a breakthrough for both Fridman and the coaching staff, and eventually she pushed her personal best to 41.19 metres, some eight metres better than her high school best despite six years of rust and dust.

Still, none of it was enough for Fridman to qualify for nationals and thus her last chance to qualify was at the Great Northwest Athletic Conference’s championship meet.

First consider that just getting to GNACs was a phenomenal accomplishment, but then listen for that figurative second wind.

In her very first throws at the conference meet, staged at Monmouth’s Western Oregon University, Fridman set yet another PB with a throw of 42.49 metres.

Yet as good as that was, it was still not enough to punch her ticket to nationals, and she was unable to better it over each of her next four throws.

Fortunately, she had one more remaining.

“To be honest, I thought that my last throw at GNAC’s might be the last throw ever for me,” remembers Fridman. “So I just chucked it as hard as I could and it worked.”

The throw travelled 44.60 metres that day, but it’s actual distance couldn’t be measured.

Thrilled at what is a completely unexpected finish to her collegiate sports career, Fridman can’t thank her teammates, trainers and coaches in both sports enough for the experience she’s had.

And while the final chapter of her SFU Clan sports story has been surreal beyond her wildest expectations, she is determined to simply enjoy it for what it is.

“For me, this is the bonus round,” she says. “There is no stress. I have thought a lot about what has happened over my time here and I wouldn’t have changed a thing.

“All of my experiences in volleyball, all of my ups and downs, they’ve helped me develop as an athlete and a person. I wouldn’t be doing what I am doing right now without it.”

In the end, something told Lauren Fridman to throw caution to the wind. She never dreamed it could take her so far.