His given name, roughly translated, is Great Warrior.

For Mt. Douglas Rams’ quarterback Gideone Kremler, it’s been all too fitting over a high school football career in which he has matured from a young lion king into a crusty, old field general, all by his 11th grade campaign.

With his braced right knee the most visible reminder of the ACL surgery he underwent this past Feb. 28, this is a different Kremler that the Irish will face.

But Gideone Kremler is now fully in tune with the big-picture reality, and that has meant not only a vow to his doctors and physiotherapists to curtail his reckless abandon, but a new partnership with head coach Mark Townsend in which the pair have worked together to ensure that a new style of starting quarterback is breaking the huddle over these final few days of October.

“I won’t be trying to run all over the field and make all these crazy plays,” said Kremler earlier this week as he prepared to start for just the fourth time this season. “It’s hard, but I have kept my word. I am doing my best for the team with my limited physical ability.

“Who knows?” he continued. “I might be able to run and do some crazy stuff. But I also know that if I cut once, I could miss a whole season and the last thing I want is to sit out my Grade 12 year.”

And therein lies the defining plot line with one of our province’s most talented and gifted young athletes.

Re-invention is borne of necessity and for the rest of this season, Kremler will attempt to show that despite a braced knee and a resulting decrease foot speed, that he can change his game and morph in the kind of pocket passer that can lead a team deep into the post season.

CLARK KENT AND HIS ALTER-EGO

“He is Superman, I think he has a cape on under there.”

Those were the words of Rams’ head coach Townsend less than 48 months ago, on the evening of Dec.6, 2015, after the Grade 9 Kremler shattered any notion provincial sports historians may have had about how young an underclassmen could be to lead a team to a B.C. senior varsity title.

Kremler had just piloted the Rams to a 34-17 win over the Fighting Irish in the Subway Bowl title game at B.C. Place Stadium.

It was Mt. Douglas’ fourth title in five seasons, and with a force of nature at the controls, the ride didn’t look like it was going to end any time soon.

Yet the following season, as he continued to play a demanding schedule of both JV and senior games, Kremler injured his knee in an Oct. 21, 2016 JV game against the New Westminster Hyacks.

As a result, Kremler did not play in the next day’s senior varsity tilt against the Hyacks, a game the formerly undefeated Rams lost 45-19.

Two different medical opinions both rendered the same diagnosis: A Grade 2 MCL sprain with a recommended four-to-six weeks of rest.

“Over the first two games I felt great,” said Kremler, who had led his team into the quarterfinal round against the Terry Fox Ravens of Port Coquitlam. “I could run, I could cut. So I rolled out and I was running and I took one false step and my knee buckled.”

It was still early in that game, and Kremler looked done, and you would have said the same for his team’s hopes if not for the fact that Terry Fox’s star running back Jeremy Kankolongo had also suffered an injury.

Both sat out most of the third quarter but then both returned in the fourth to battle each other, with the Ravens eventually prevailing 34-25 en route to a dramatic title-game win two weeks later over Notre Dame.

Thinking that his injury was MCL-related, and not ACL-related, he continued playing for the Rams’ JV team, which eventually lost 17-14 loss to Surrey’s Lord Tweedsmuir Panthers in the B.C. Triple A final.

The universe was getting a little fed up with his plucky nature and ultimately sent him a message.

“I thought it was better, and then in that game, the same thing happened again,” Kremler relates of the JV final. “I went to plant on a weird angle and something popped. That’s when I realized I wasn’t healthy. I got up and I walked off the field. I wasn’t going to be carried off the field.”

The prognosis later confirmed a torn ACL and led to surgery late this past February, and it’s by now a moot point whether the ACL was torn the entire time, or just partially torn.

Kremler hunkered down for a summer of rehab, knowing that he might not be ready for the start of the season, but that he could make a difference by the time it was ending. 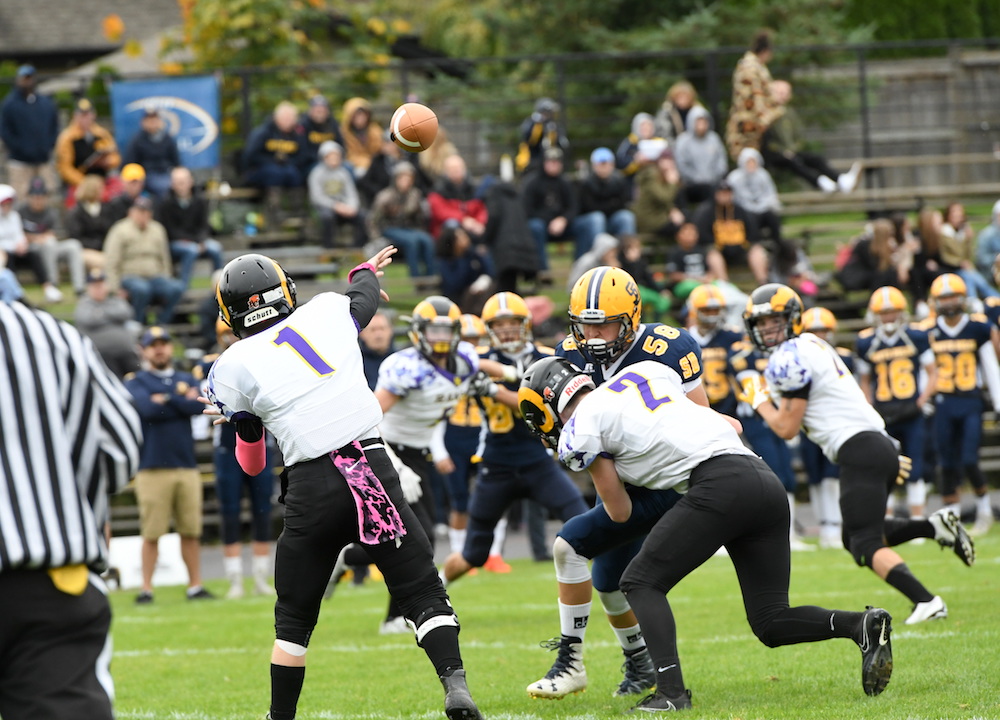 Rams’ quarterback Gideone Kremler stands back in the pocket and fires down field against the South Delta Sun Devils. (Varsity Letters photo by Howard Tsumura)

The vertically-spurred Rams’ offence has had its share of top pivots over the years, including Ashton MacKinnon and Jordan Pohl.

Yet the dominance of Kremler so early in his career makes he and perhaps current UBC Thunderbird Marcus Davis the two most impactful players in program history.

And if you’re sculpting a title contending team on the fly, like Townsend has had to do ever since Kremler’s initial knee injury against the Hyack JVs, it helps when the lump of clay can be molded in any number of ways.

“We all know Gid is a great talent at the quarterback position because he has that high football IQ, the ability to read defences and to so quickly get the ball out of his hands,” says the coach, who in essence is describing the style that Kremler must now play until that knee is fully healthy again.

“It shows a lot of maturity on his part to adapt his game to be a pocket passer. Right now he is coming off three great weeks.”

The partnership between Townsend and Kremler is huge in this late, regular-season drive by the Rams.

The level of their performance against a desperate Vancouver College team will tell the truth about how ready they are to be a contender.

His return has been the B.C. high school football world’s version of an anticipated return by an injured Aaron Rodgers, rejoining his Green Bay Packers in the late going for a potential playoff run.

Kremler credits his family for unending support through the tough times, including twin brother Zairech, who has been hugely influential as one of the team’s leaders this season.

“And coach Mark has been awesome in terms of slowly getting me into the lineup,” he adds. “I have the tools and it’s up to me to put those into motion, and everyone had been there to help.

“I think there is a lot more to this team than our record is showing. It may not be the normal winning of the Mt. Douglas Rams, and there has been some frustration and some anger.

“But we have to move through this as brothers because these are the same guys that I have played with the last five, six, seven years. So when we get on the field there is a lot of brotherhood and a lot of family that comes with it.”

A great warrior couldn’t have said it any better.

If you’re reading this story or viewing these photographs on any other website other than one belonging to a university athletic department, they have been taken without appropriate permission. In these challenging times, true journalism will survive only through your dedicated support and loyalty. VarsityLetters.ca and all of its exclusive content has been created to serve B.C.’s high school and university sports community with hard work, integrity and respect. Feel free to drop us a line any time at varsitylettersbc@gmail.com.