When she left B.C. as the single most-dominant competitor in the history of the B.C. girls high school multi-event championships back 2013, Langley’s Georgia Ellenwood immediately set her focus on an even bigger prize.

On Saturday, she wrapped up her collegiate track and field career by meeting that goal when the Wisconsin Badgers’ senior won the NCAA Div. 1 heptathlon title in Eugene at the University of Oregon’s historic Hayward Field.

“I think I’m still processing the whole thing and it doesn’t really feel like I won yet,” Ellenwood, a 2013 graduate of Langley Secondary School, told uwbadgers.com, Wisconsin’s official athletic website, after becoming the first Badger to ever win the a women’s multi-event national championship. “I think it hasn’t really sunk in yet. It doesn’t really feel like I’m the first, because when I was recruited I knew about so many great heptathletes who have come through the program. To know that I’m one of them and I’m the best one that’s come through Wisconsin hasn’t really hit me yet.” 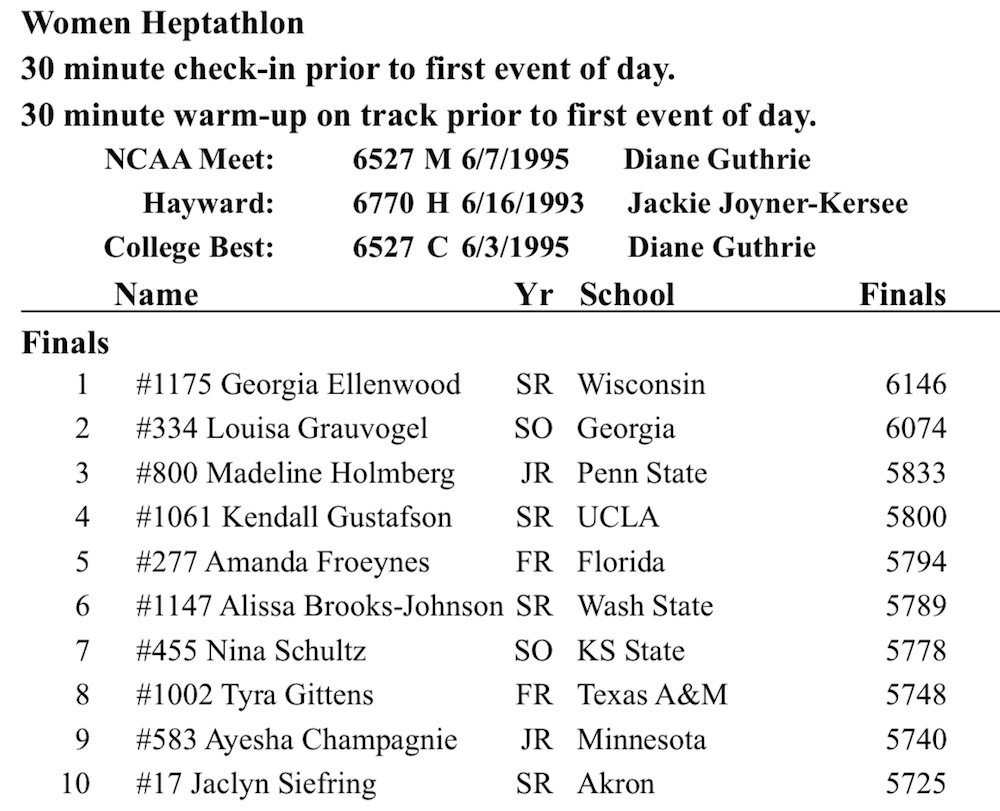 For the competition, Ellenwood placed in the top nine in all seven of her events, but she really soared in the jumping and throwing events.

Ellenwood, a three-time Big 10 Conference champion and a six-time All-American, sat in second place after the first day of competition but her effort in the long jump on Saturday pulled her into the lead.

She held a 15-point lead on Grauvogel, and needed just to beat her in the 800m finale to clinch the title, which she did by over four seconds.

Ellenwood was the most dominant athlete in the history of the B.C. school multi-event championships, and upon her graduation in 2013, where she was honoured as a member of The Province’s Head of the Class, she distinguished herself as the first to ever win the B.C. high school heptathlion title four straight years. It’s a distinction that she continues to hold.

Her 2013 total of 5,296 points set the new B.C. high school meet record, one which was broken by Schultz (5,501) in 2016 when she wrapped up her senior year with the Hyacks by winning three straight titles.

Quite amazingly, B.C. produced two of the top seven multi-event athletes in NCAA Div. 1 this season and Schultz looks ready to continue to wave B.C.’s flag in the most demanding event in the track and field canon.

Ellenwood also starred in other senior varsity events over her Grade 9-12 career with the Langley Saints at the B.C. high school championships.

If you’re reading this story on any other website other than one belonging to a university athletic department, it has been taken without appropriate permission. In these challenging times, true journalism will survive only through your dedicated support and loyalty. VarsityLetters.ca and all of its exclusive content has been created to serve B.C.’s high school and university sports community with hard work, integrity and respect. Feel free to drop us a line any time at howardtsumura@gmail.com.