LANGLEY TOWNSHIP — Welcome to the countdown to the 2022 Tsumura Basketball Invitationals!

We’re back bigger than ever as we start our second decade at the home of B.C. High School Basketball: The Langley Events Centre.

The dates to mark on your hoops calendar?

The boys tournament gets us underway with four days of the competition from Dec. 7-10.

The girls tournament follows with a four-day run of its own, from Dec. 14-17.

As a manner of explanation, we are unveiling the boys and girls draws as separate postings, so if you are looking at one and want to see the other, varsityletters.ca is the place to get all of the information.

My thanks to the staff at the LEC for all of their incredible work in bringing the draws to life with the brackets you will be able to peruse and study in the countdown to tipoff.

This season, each of the boys and girls TBI events will feature three separate draws.

The 16-team bracket will see every invited team play one game per day over the four days of the event, mimicking the precise path that will need to be taken come March when the provincials will be hosted at the same LEC venue.

As a new feature this season, we have also constructed two separate eight-team draws, and so as not to confuse our legion of bracketologists, both of them have been produced on the same document.

Please know that these draws are largely separate of each other save for the final day of competition.

What follows are the brackets for all three boys tournaments.

I advise, however, that you also read the information which follows because we’d love for you to know why we have gone to a new format, and how the draws for these brackets were constructed. 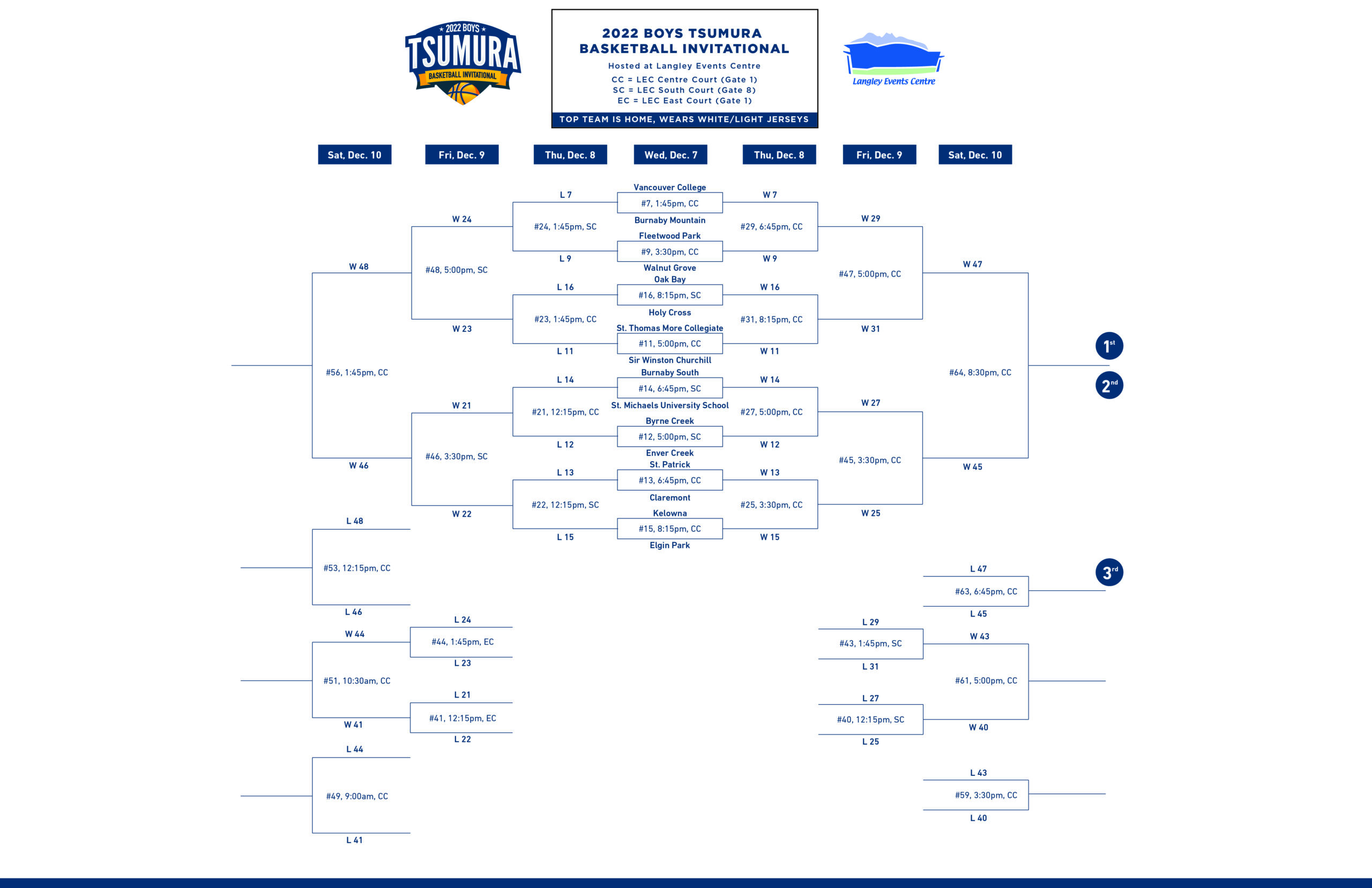 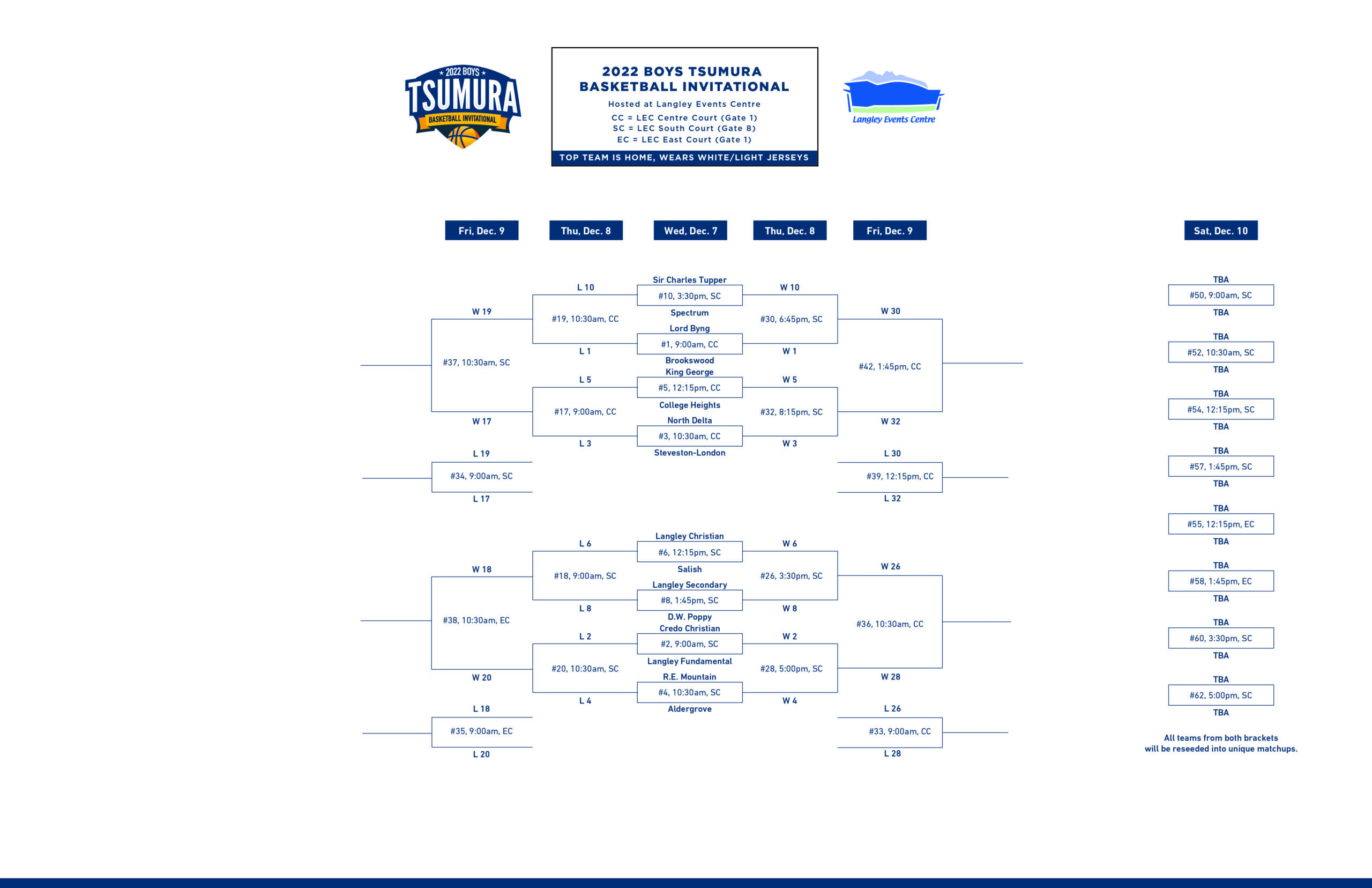 It is my sincere hope that the first eight-team draw you see will be amongst the most hotly-contested draws you see anywhere this season.

We have strived to look deeply at all rosters to try and insure, to the best of our ability, that we invited what amounted to an eight-team pick ‘em draw with intense competition on both the championship and consolation sides of the draw.

The second eight-team event was created to bring Langley schools and some of their closer geographic rivals into an event in which they too could begin the early part of their season playing within the atmosphere of the LEC.

Each of the two eight-team draws will play Wednesday through Friday. Then, come Friday evening, the tournament committee will look at the 16 teams and, with an eye towards continuing to keep the level of competition as tight as possible, re-seed the draw to come up the best games possible as part of eight-game Saturday schedule tipping off at 10 a.m. and running throughout the day.

All three draws at each of the respective boys and girls events will be staged on both the Centre Court and South Court gymnasiums, with four games being played on East Court on the final day of competition.

Yes, our 16-team brackets are chalk full of the very best the province has to offer at multiple tiers of competition.

Yet if you are going through any of the draws to try and figure out seed numbers for all the teams, you will fall short in your attempt.

A number of factors came into play when it came time to match-make these three boys brackets.

We looked at what pre-season rankings were done last March (the girls did not produce Top 10s below Quad-A), we confidentially polled a select number of coaches asking for their input in seeding the draws (either 1-16 or 1-8), then we began the process of piecing everything together, keeping teams from the same leagues away from each other in the opening round wherever reasonable.

I can say from covering this game in B.C. the past 40 years that even the teams you may surmise to be No. 16 or No. 8 seeds have quality players who are ready to establish themselves in their senior varsity careers, and of course the entire beauty of all this is that we are going get surprises.

Shy of owning an actual crystal ball, then, our ultimate goal is provide as many compelling and hotly-contested games as possible.

With that, I can boldly say to our dedicated coaches “Play your four games, and I am positive that you will be able to tell me that your team got an opportunity to get nothing but better.”

Here’s to eight great days of hoops at the LEC.

See you in December.

2 thoughts on “BOYS Tsumura Basketball Invitational 2022: This season, the TBI enters its second decade with a 32-team field in three separate brackets!”