LANGLEY — The 2022 senior girls Tsumura Basketball Invitational, set to open a four-day run Wednesday at the Langley Events Centre will unveil something of an historic opening-day draw.

No official records have been kept, but our star-studded 32-team tournament, broken down into three separate draws this season, may well likely be the first to ever feature every team ranked No. 1 at its respective tier as per the most recent Top 10 polls which made up the B.C.’s senior girls preseason rankings.

The latest B.C. senior girls high school varsity basketball rankings are expected to be released at some point on Wednesday, so there may well be some changes. Yet as of early-evening Tuesday, it’s reason for girls basketball fans to dig in and enjoy what should be four peerless days of action.

We tip off at 8:30 a.m. on both our Centre and South court facilities, kicking off an eight-game schedule in each gymnasium, with three separate draws — the Super 16s, the Rising 8s and the Local 8s — taking place.

Over the course of the week, you’ll get to know the best girls basketball talent this province has to offer, and when say we’re star-studded within our ranks, we mean it.

Putting this draw together was extremely difficult, a fact made even tougher by trying to maintain balance while avoiding common league foes over Wednesday’s opening round of 16 championship games.

But the cream will always rise to the surface, and with the season still in its infancy, we hope to lay no more than a basic schematic for the 2022-23 season because this weekend is where the improvement begins in earnest.

In the breaking news department, we have added yet another Local 8 team after one other decided to pull out of the tournament well beyond the 11th hour. All of that means we have added a new team in the form of Abbotsford’s Rick Hansen Hurricanes, who plug in to face Langley’s R.E. Mountain Eagles in a 10 a.m. game Wednesday on South Court.

The most recent tournament schedules for all four rounds of the three separate draws have been posted at the bottom of this story.

I’ve also hand-entered the three draws for Day 1 by their respective top and bottom halves for those eyes often challenged to read a smaller type-face.

As per my standard style in these matters where a 16-team draw is concerned, winners within their own quadrants will play each other in the quarterfinals in Round 2 on Thursday, while Friday’s Final Four will feature A vs. B champs, and C vs. D champs… the winners then meeting for the Super 16 title Saturday.

In the case of the two eight-team tournaments, top half winners will meet in the Final Four on Thursday, leading to Friday’s championship final.

On Saturday, as we did with the boys draw last week, the TBI tournament committee will combine both the Rising 8’s and the Local 8’s draw and produce what they deem to be the eight most competitive games, all of which will be played throughout the day on Saturday.

(All games at Langley Events Centre)

Note — Games will also be played on East Court over various points over the final three days of girls TBI 2022.

(All games at Langley Events Centre)

Note — Games will also be played on East Court over various points over the final three days of girls TBI 2022. 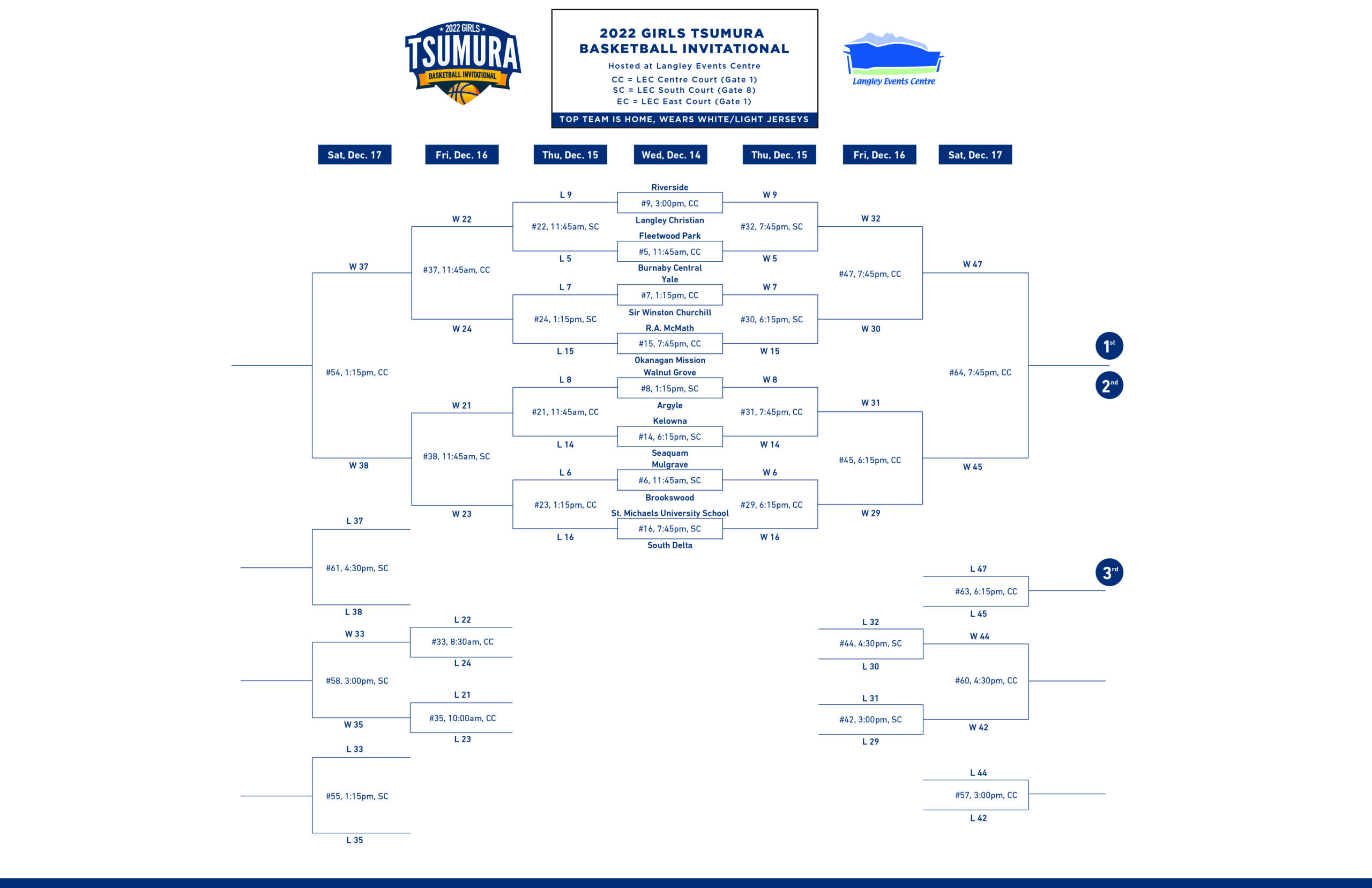 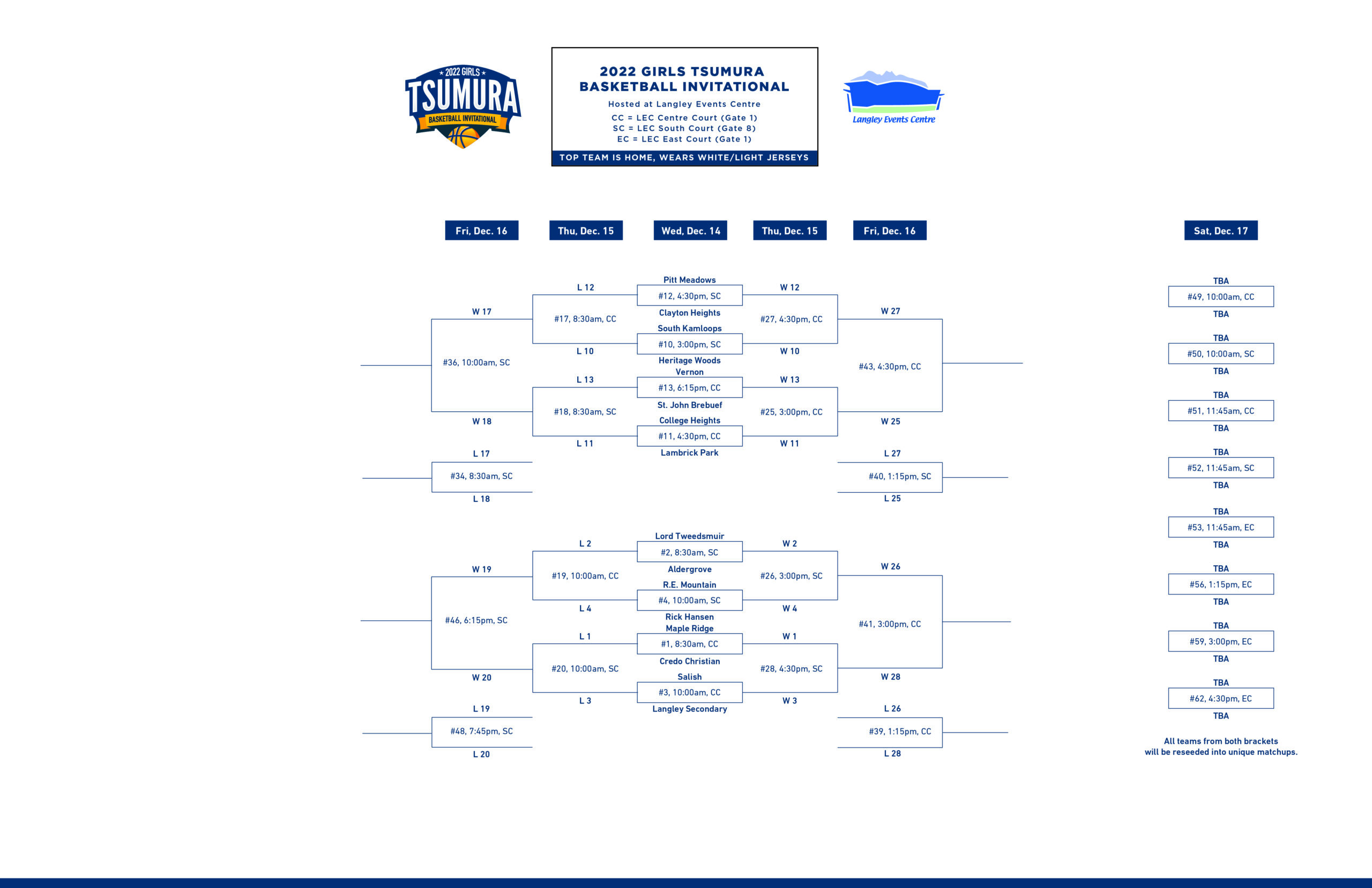