LANGLEY — By this time next week, we will have crowned B.C’s. 75th top-tiered senior boys high school basketball champions.

This season, celebrating the diamond jubilee of the provincial championships has been akin to breaking open a time capsule and feeling, quite immediately, that instant connection to our past and why the tournament itself continues to not only endure, but take on a new life of its own with each passing year.

As the showcase to that party, the 75th anniversary fantasy bracket, designed to crown our all-time greatest B.C. high school boys basketball team, reaches its fitting conclusion today, less than 48 hours away from Wednesday’s official opening tip. (Full completed tourney bracket is included a the bottom to keep the suspense if that was your choice)

The school buses arrived outside the Langley Event Centre a few hours ahead of the official tip, and although much has changed in the real-time world of high school basketball players since the 1978 Nanaimo Islanders and the 1988 Richmond Colts won their respective B.C. titles, nothing about the excitement, the nerves, or the surrealistic head space that a championship game day brings will ever change.

There is an aura about them as they make their way through the sliding doors of the Langley Events Centre, and the looks on their faces tells a story.

Undefeated against B.C. competition for the entirety of their two season run as provincial champions, they are loose and laughing, yet their confidence is unquestioned.

You can see it in the face of Joey deWit, the alpha Colt whose love of a good challenge is legendary.

And then there’s Ron Putzi, who at 6-foot-6 was not a giant by any stretch, yet could played so huge at any part of the floor he happened to be at while under the guidance of legendary head coach Bill Disbrow.

As they head into the cavernous Arena Court complex, the touches were impossible to miss, especially the massive poster, complete with team caricatures, which reads ‘Bill’s Boys Are Back in 2020.’

Not too much later, a second bus pulls up out front, and it’s a yellow, rickety vintage 1970’s model emblazoned with ‘School Dist. 68’ markings.

Transported from an age one full year ahead of the debut of something called the Sony Walkman portable music player, a crew and coach of long-haired Nanaimo Islanders piles off the bus and shuffles into the LEC, several looking like cast extras from the 1970s-set movie Dazed and Confused.

There’s three brothers among them — Gerald, John and Greg Kazanowski — and their chemistry under head coach John Levering has been incredible.

Confidence is a prerequisite for this championship matchup, and as the Islanders stroll into Arena Court for their brief shootaround, they hear a song playing over what to them is a futuristic sound system.

That song is Raz-ama-naz by the rock group Nazareth, but as far as Gerald Kazanowski is concerned, it’s Raz-ama-Kaz.

The legend of the 1986-87 to 1987-88 Richmond Colts is based on so many things, but the fact that for two years it took on all comers in the B.C. high school basketball world and didn’t lose a single game, is certainly its trump card.

The Nanaimo Islanders lost to the Kelowna Owls 67-65 in the opening round of the 1977 championships.

The Colts, however, won all eight of their games in two years at the provincials, and when you consider the comfortable 99-80 margin of its 1988 B.C. final win over the Seaquam Seahawks, you’re inclined to think that they breezed through the field.

Not so fast, reminds Putzi.

That’s because in the 1987 quarterfinals at the Agrodome, Abbotsford’s Mike Hanik hit a free throw to tie the game 58-58 and send it into overtime.

By that stage, Putzi, Jamie Stone and Rob Rowett, all starters, had fouled out of the game.

Disbrow threw guard Neil Blake out there in the OT, and with about a minute left, he made some magic happen.

“He came in cold, and then he hits this shot that looked like it went over the backboard,” remembers Putzi of a release which came so deep along the baseline. “I remember him being in the air and taking that shot and thinking ‘Oh my God Neil, don’t shoot that’ but he hit it, and if he didn’t, we never would have won two titles.”

Blake went on to a career as a private equity banker in New York City, and every time Putzi sees him, the greeting is always the same.

“I hug him, I thank him, and I tell him that without that shot we would not have the legacy that we have today.”

As the expected sell-out crowd fills the stands at the Langley Events Centre, the Colts come charging out onto the court to the strains of their theme song:Foreplay/Long Time by 1970s rockers Boston.

Pretty soon the lay-up lines for both teams are progressing with blinding precision.

Putzi and Gerald Kazanowksi, each checking in at 6-foot-6, are seen checking out each others skills as both get the crowd going with their dunking prowess.

Then, the buzzer sounds.

Quite remarkably, as the two teams line up for the Canadian national anthem, they are strikingly similar across the board in terms of stature with the Colts having a slight advantage with its taller bench players like the 6-foot-5 Grade 11 pair of Graeme Lindsay and Andrew Zawada.

The Islanders have the three Kazanowskis in their main rotation, along with the likes of guards Mark Spees and Colin Tinga, and 6-foot-5 forward Paul Davis.

“He is the best defender I ever saw,” Colts’ coach Disbrow has said in reflection over the years of de Wit. “He would come into practice, walk over to a player and say ‘Today, you don’t touch the ball.’ He would just pick someone and tell them ‘It’s over for you.’”

With all of that, and with Putzi and the Colts’ frontcourt reserve pair of Zawada and Lindsay able to box out Gerald Kazanowski over much of the first half, the Islanders struggle to find their form.

Spees is being hounded and challenged to find shooting rhythm and space, and Richmond’s Tait is orchestrating to  the top of his game.

At the half, Richmond hits the locker room with a 52-41 lead.

“I think we knew that by Grade 12 that we had a pretty special team,” reflects Putzi, “and although we went undefeated, I feel like above everything else we had such great respect for each other as individuals. I really feel like it was a team which had zero arrogance.”

The roster was tight and talented, although the bench often times is overshadowed by the starters.

Still, the likes of seniors Jeff Pereira, Sowen Ng and Blake helped establish the winning culture, and Grade 11s like Trevor Kojima and Glen Campbell were players who would show their value even more the following season.

Gerald Kazanowski enjoyed a career filled with highlights at the top levels of game.

National championships under Ken Shields at Victoria, international play under Jack Donahue with the Canadian national team, getting drafted by the Utah Jazz, facing the original 1992 US Olympic Dream team.

Yet ask him about high school, and the memories are just as alive in him today as they were back in 1978.

“He was a big reason for my success,” Kazanowski says of John Levering, his high school coach at Nanaimo. “He said to a shy guy at the end of his Grade 11 year ‘Gerald, you think about, about maybe playing in the Olympics one day. From that moment forward, I put it in the back of my mind.”

It’s from that place that we pick up the second half.

Levering’s pep talk seems to have worked, because the Isles are getting back to finding ways to play their style of basketball.

“My two brothers were like mosquitoes, really fast,” Kazanowski remembers. “Our offence would start with super pressure on the guards. Most teams were happy just to get the ball over half court. Then, our guards would play unorthodox.

“They would tap the ball back to me, and I would throw it long, so I guess I would call it high tempo,” he added. “We always wanted to get steals and lay-ups.”

The blitz of the Hub City five evens the score after the third quarter at 64-64.

And according to two veteran B.C. high school coaches who saw the Islanders first hand back in the day, the Nanaimo style was not only effective, it was in many ways pioneering.

“Whenever you scored on them Gerald was throwing it to one of his brothers and they scored right back on you in seconds,” said Rich Chambers, the former Centennial head coach who later experienced the feeling of B.C. title glory at helm of PoCo’s Terry Fox Ravens. “They were running the uptempo super fast-break way before anyone else.”

Added Ken Dockendorf, another B.C. championship coach who is still guiding the Maple Ridge Ramblers: “Nanaimo was ahead of their time with how they pressed and ran their fast break. They truly were a forerunner to the new style of play with more intense pressure and scoring in transition.”

The rebounding of Gerald, the defence of John, and the scoring of Greg in the fourth quarter proves to be, in the eyes of the B.C. High School Boys Basketball Association committee entrusted with making the final call on a fantasy champion, the ultimate difference makers.

In fact it’s a fast-break basket off a strip by John Kazanowski, whose ensuing outlet to Greg Kazanowski and near-touch pass at the rim for a buzzer-beating lay-in by Gerald Kazanowski that allows the 1978 Nanaimo Islanders to defeat the 1988 Richmond Colts 84-83 and claim the honour of being B.C.’s best-ever boys high school basketball team.

All players and coaches interviewed for this series were unaware of the outcomes, as was your author, at the time of those interviews. All 64 teams selected, as well as each round’s winning teams, was solely made by the B.C. High School Boys Basketball Association.

In the spirit of celebrating our B.C. high school basketball community on the occasion of its 75th birthday, these words from Gerald Kazanowski seem especially fitting.

“I think that we were a phenomenal team,” Kazanowski says, “but really, how do you judge one era versus another?

“But hey, maybe one day someone will invent some kind of a program which can do just that,”

So now, let’s blow out the candles ands begin the countdown to B.C. tournament No. 75.

See you all later this week at the Langley Events Center. 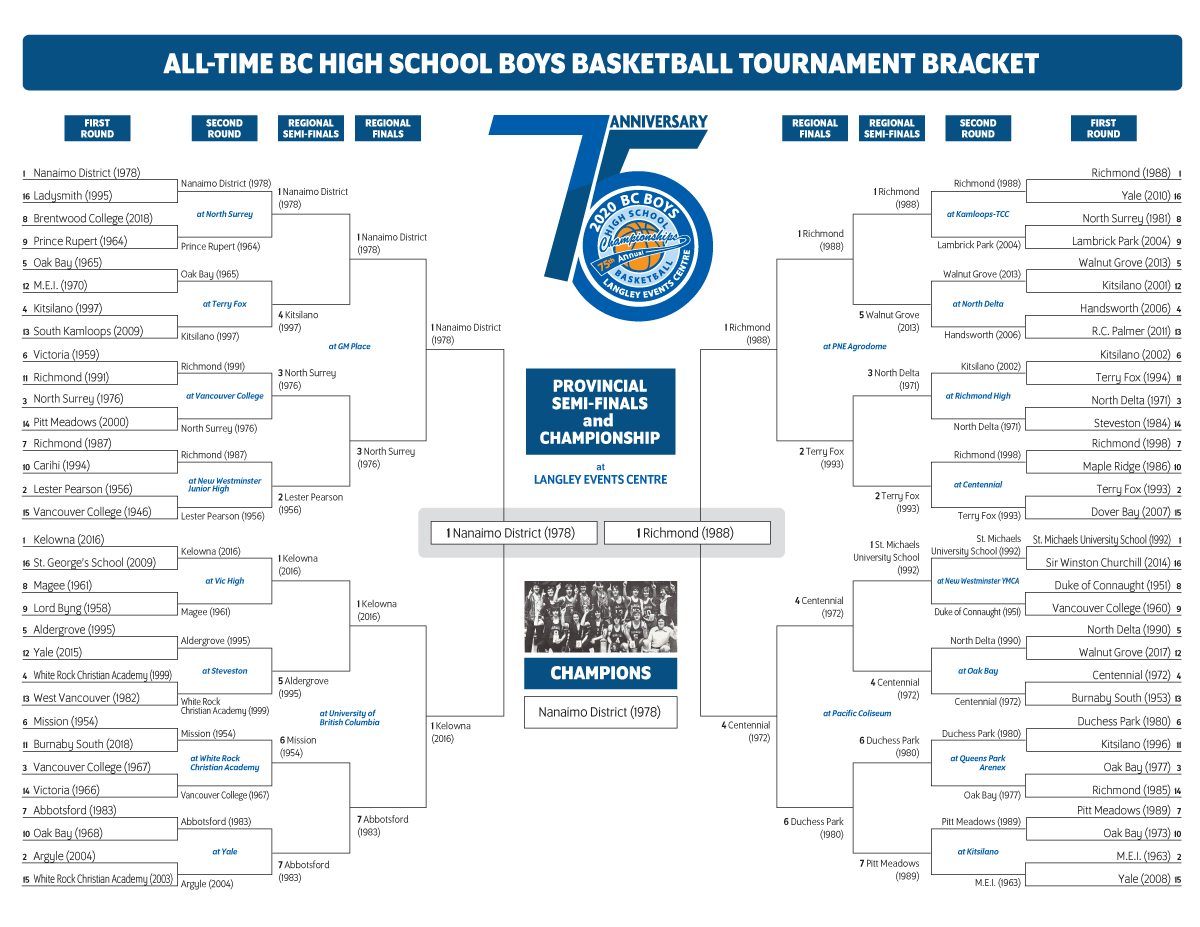 (For a higher-resolution version of this bracket, click here)

12 thoughts on “THE 75th ANNIVERSARY FINALE: Nanaimo ’78 and Richmond ’88 both brought depth, talent and innovation to the court! So which team was best?”