LANGLEY — What a day to dance on the hardwood of the Langley Events Centre.

Thanks for coming back and joining us for the third day of the 2022 Tournament.

Please keep checking back throughout the evening as myself and fellow writer Aaron Martin cover the day’s semifinal clashes.

Games are being live-streamed if you can’t make it out. Go to TFSEtv.ca

As well, please share our links and postings on social media. It is very much appreciated!

Yet as newcomers to the Big Dance, and to its Final Four Friday in particular, you could have excused them if the bright lights and the size of the moment wound up overwhelming them.

Instead, they stared it all down.

“These kids have grown so much in the last five years of high school and they have taken their licks,” said Orcas’ head coach Kirk Homenick, after No. 2-seeded Elgin Park took it to the Duchess Park Condors right off the opening tip, getting the No. 3 seeds from Prince George in foul trouble, playing to its own strengths as one of the longest and athletic teams in the province en route to a 75-63 win.

The victory propels the Orcas into Saturday’s championship final where it will face the winner of Friday’s second Final Four game between No. 1 St. Partick’s of Vancouver and No. 4 A.R. MacNeill of Richmond.

“This team, they’ve had their losses where they have collapsed or someone hit a Hail, Mary against us to win,” continued Homenick of a the senior-laden multi-sport line-up of players which features 10 Grade 12s including nine who played on the school’s Quad-A B.C. boys volleyball runner-up team. “They have learned about resilience and character, and I mean, I am so proud of these guys.”

The Orcas went on the attack early, and their play resulted in Duchess Park senior point guard and team leader Cole Laing getting whistled for a pair of quick fouls.

From that point, Laing was never able to get fully untracked, and the Orcas built a lead of as many as 17 points over the latter stages of the first half.

“Our game plan taking it at them, at their bigs and getting them to foul, and then just getting back on defence,” said Elgin Park’s exquisite 6-foot-5 senior guard Cyrus Harrison, whose length and dribble-drive game made him impossible to handle en route to a 29-point performance on 11-of-19 shooting from the field.

Elgin’s energy worked to such an extent that by halftime, Laing and key energy paint player Chris Zimmerman each had three fouls, and multi-purpose forward Evgeny Baukin a pair.

Baukin matched Harrison’s 29 points on 12-of-26 shooting, going inside and out.

But Laing with 14 points and Aidan Lewis with two, each scored well below their season averages for the notherners.

“Cyrus had a heck of a game and I think he is one of the best players in the province,” said Homenick. “He’s going to have a great career post-high school. He puts it on the floor, rebounds, guards the toughest guy on the other team. Adam, I think he is one of the best Grade 11s in the province. He can catch and shoot and has such a nose for the basket. I am so lucky to be coaching all of our guys.”

The contrasts for Duchess Park were clear.

“Everything that could have went wrong, went wrong today, and Cole picking up those two early fouls was huge,” stated Condors’ head coach Jordan Yu as Duchess Park, which trailed 48-35 at the break, reeled in the Orcas to within a pair of possessions down the stretch, but expended too much energy and manpower in the process.

“(Laing) has been our leader all year long and we rely on him to have the ball in his hands and make good decisions and digging a hole against that team? It was really tough to come back.”

Afterwards coach Homenick, a 7-footer who played in the Pac 10 in the early-to-mid 1990s with the Southern Cal Trojans, applauded his team’s execution of its game plan and the way in which they were able to get the Condors into early foul trouble.

“That was huge because Cole and Yvgeny are great players,” said Homenick of Laing and Baukin. “It helped us set the rhythm and the tempo. We wanted to cause a little bit of a challenge getting the ball up and down the court, and that was really helpful.

“I am a defence-first guy and I am a big guy too, and I like protecting the paint,” added Homenick, “so if you can’t play defence, you can’t be on the court with us.” 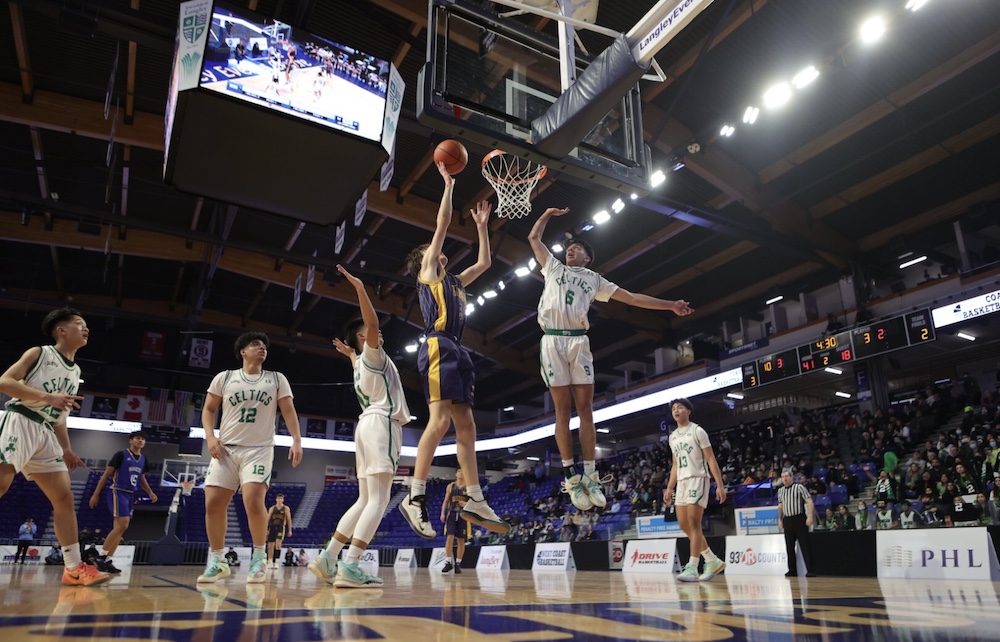 LANGLEY — Nap Santos, still feeling the emotion of Thursday night, did his best to choke back his tears Friday night at the Langley Events Centre.

The head coach of Vancouver’s No. 1-seeded St. Patrick’s Celtics, who had just led his team to a 91-61 win over Richmond’s No. 4 A.R. MacNeill Ravens and a berth in Saturday’s B.C. senior boys high school championship final against Surrey’s No. 2 Elgin Park Orcas, was asked how his team prepared to play the biggest game of its season one night after losing star Grade 11 guard Kaden Carrion to a broken leg in the quarterfinals against Surrey’s Princess Margaret Lions.

“We went to the hospital two hours before the game, as a team we went to see him and he gave us the inspiration to do this for him…” said Santos of Carrion, who suffered clean breaks of both the tibia and fibula in one leg. “He had his surgery scheduled for 6 p.m., so he got to watch the first part of the game.”

And Santos’ reaction to the effort his team gave?

“They did it with passion, with heart.. all for Kaden,” he said.

The Celtics came out in a 2-3 zone which they extended with aggression, and all of the tips and turnovers they were able to generate out of that schematic led to their blistering fast-break offence.

St. Pat’s led 26-13 at the quarter pole and 48-25 at the break, then absorbed an inspired 15-2 run in the third quarter, eventually rediscovering its earlier energy en route to the win.

Irish Coquia, the team’s scoring leader with 28 points and 19 rebounds, played like a force of nature for his fallen teammate.

Everett Swaim was Mt. Everest for his Ravens, scoring 23 points and grabbing 17 rebounds, while Josh Mayan added another 16.

What was the key to getting off to the hot start out of its aggressive zone?

“It was getting our hands everywhere and being annoying,” said Santos of a core whose team won the 2020 B.C. junior varsity title as ninth graders. “We didn’t want to let (MacNeill) settle down.”